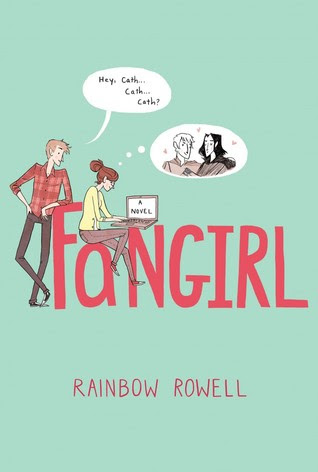 Title: Fangirl
Author: Rainbow Rowell
Publisher: St Martin's Griffin, 2013
Target Audience: Young Adult
Genre: Contemporary
Goodreads
Amazon
Synopsis: Cath is a Simon Snow fan. Okay, the whole world is a Simon Snow fan, but for Cath, being a fan is her life--and she's really good at it. She and her twin sister, Wren, ensconced themselves in the Simon Snow series when they were just kids; it's what got them through their mother leaving.

Reading. Rereading. Hanging out in Simon Snow forums, writing Simon Snow fan fiction, dressing up like the characters for every movie premiere.

Cath's sister has mostly grown away from fandom, but Cath can't let go. She doesn't want to.
Now that they're going to college, Wren has told Cath she doesn't want to be roommates. Cath is on her own, completely outside of her comfort zone. She's got a surly roommate with a charming, always-around boyfriend, a fiction-writing professor who thinks fan fiction is the end of the civilized world, a handsome classmate who only wants to talk about words . . . And she can't stop worrying about her dad, who's loving and fragile and has never really been alone.

For Cath, the question is: Can she do this?

Can she make it without Wren holding her hand? Is she ready to start living her own life? Writing her own stories?

And does she even want to move on if it means leaving Simon Snow behind?

What can I say about this book that has not yet been said. If you are a woman of a certain age (that sounds so Austenian), especially a woman who reads and has decided to share her thoughts of books online, you have an incredibly deep and empathic connection to this story. Not to echo what everyone else has said about this book, but seriously, this was my freshman year of college. And now on to my embarrassing confession... I found it very hard to leave behind the friends I had made in high school and I turned to the Harry Potter fandom. I spent a lot of my time reading fanfiction, in chatrooms, speculating about the next two books, and even wrote a little fanfiction that I never published. I spent most of my time in my dorm room on the internet, studying, reading, or watching movies. That being said, independent to the fact that I feel like she is me, Cath is an incredibly relatable protagonist. She gets at the heart of every person's insecurities and feelings about making friends, starting over, and trying something new. I also really liked her because despite all the bad things that seemed to happen to her she never really became whiny and adopted a "whoa is me" sentiment that she could have. She found strength and confidence. She had her ways of coping which may have not have been the best way to deal with it but she is dealing. Despite being a hopeless introvert, I'd say she's pretty well-adjusted.

I also really like the contrast of Cath's friends and the other main characters. First was Wren, her twin sister. When they start college Wren wants to start completely fresh. She leaves Simon Snow behind and decides that she wants to be a "normal" college freshman and get drunk all the time. Wren is the mirror to Cath. She is what Wren could be if she just changed. But despite the fact that she seems to be the one that has everything together, it may not actually be true and she may not be coping as well as she seems. Wren has a real transformation throughout the story (which you know I love) and in the end I end up liking her. Then you have Reagan, Cath's roommate. Reagan is quite an enigma. She's surly and seems to hate everything and everyone yet she is extroverted and social. She's another example of how Cath could be if she were to change something about herself. They have some amazing banter throughout the story. And I really like their relationship that would seem from the outside to be totally disdainful but the insults are how Reagan show's affection (this is how I am with all the friends I've made in my adult life). Finally, we have Levi, the love interest. Levi is Cath's polar opposite. He's not big on reading, he's super introverted and friendly, and he's never done great in school. But as they say opposites attract. He really seems to love and appreciate Cath for who she is and what her interests are. He's amazing!

In general I loved this story. It made me seriously giddy. I read it with this disgusting smile on my face basically the entire time. It was the perfect combination of light and fluffy, and thought-provoking and relatable. The plot developed at a steady and interesting pace. I also really liked the inclusion of some of the actual Simon Snow stories and Cath's fanfiction. It took the story to a new level.

My only criticism is that it felt like there was so much of a rising action where everything was great and wonderful and then this tremendous crash where everything went badly and then a very slow and very unsatisfying rising back up. The end of the story just seemed to plateau. I wanted more of a resolution. More of an explanation for the actions and reactions that everyone was having in the last 50 pages. It felt a little rushed at the end.

But despite that rather small criticism this was without a doubt one of  the best books I've read this year. It was exactly what I wanted and exactly what I needed. It lives up to the hype within this community. I recommended this book to anyone who has every been a part a fandom (especially if that fandom is Harry Potter), anyone who has ever felt like an antisocial introvert, or anyone who likes contemporary fiction. It's worth it!

If you've read Fangirl and have thoughts, tell me about it in the comments section (It's how I know you're reading) and as always... HAPPY READING!
Posted by My Thoughts.... Literally! at 11:36 AM