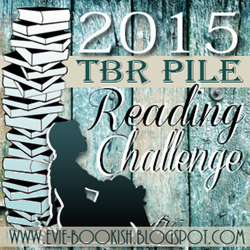 So lately I have been thinking, I have this problem with buying books and then never reading them. I know all of us here in the Book Blogosphere have this problem. But as I was thinking about the challenges I plan to do and seeing everyone's 2015 resolutions, I realized that the only way that I am going to do this is to do a challenge myself. So therefore, I am officially saying that I will be doing the 2015 TBR Pile challenge hosted by Evie Bookish

The Goal:
We all have those books. We buy them, win them, they're gifted to us. Then we put them up on a bookshelf and there they stay, collecting dust, waiting for the time when we'll finally decide to pick them up.

Join us on a quest to dust off your TBR Pile and read all the books you've been telling yourself you'll read next time you'll get a chance. This is your chance!

The Rules:
1.)  The challenged will run from January 1, 2015 - December 31, 2015.
2.) Anyone can enter! You don't have to be a blogger, just as long as you review the book you've read. You can review on your book on your blog, Amazon, Barnes & Noble, Goodreads, etc.
3.) Any genre, length, or format of book counts as long as it is a book that's been sitting on your self for some time. Short stories and novellas do count! The only stipulations that the book must have been released in 2014 or earlier. No 2015 ARCs or 2015 fresh-off-the-press releases allowed.
4.) On the 25th of every other month Evie Bookish will post a wrap-up for the previous two months. These posts will be done by one our bloggers and will contain new linkys for you to add your own wrap-up posts. If you did not sign up by January 17, this is where you can sign up as well.
5.) To help you tackle your TBR piles Evie Bookish will also be hosting Read-A-Longs on months that do not have wrap-ups. Voted on by challenge participants, Read-A-Longs will have two post dates: the first half of the book and the second half. Please note: You do not have to take part in our Read-A-Longs to participate in the TBR Pile Challenge. You can participate in all of them, some of them, or none of them. This aspect of the challenge is entirely optional.
6.) There will be two giveaways - July and December. Giveaway details will be explained once the giveaway post goes up. We don't want to overwhelm you with too many details now :)
7.) You don't have to follow Bookish to join the challenge, but you do have to follow us to be entered in the giveaways.

I'm taking it a step further and only reading books that I currently own. No buying of backlist books to read. Just books that I bought myself, won, or was gifted. I have a handful in mind that I am planning on already.

I'm thinking that I can read about two books a month.