This is a feature I started a month ago where I recommend an adult book that is similar to a YA book that I have read recently. I personally think that the idea that because a book is written about a teenager adults can't read it and vice versa. So this is my attempt to recommend books that bridge the gap. This month I am tackling Science Fiction. 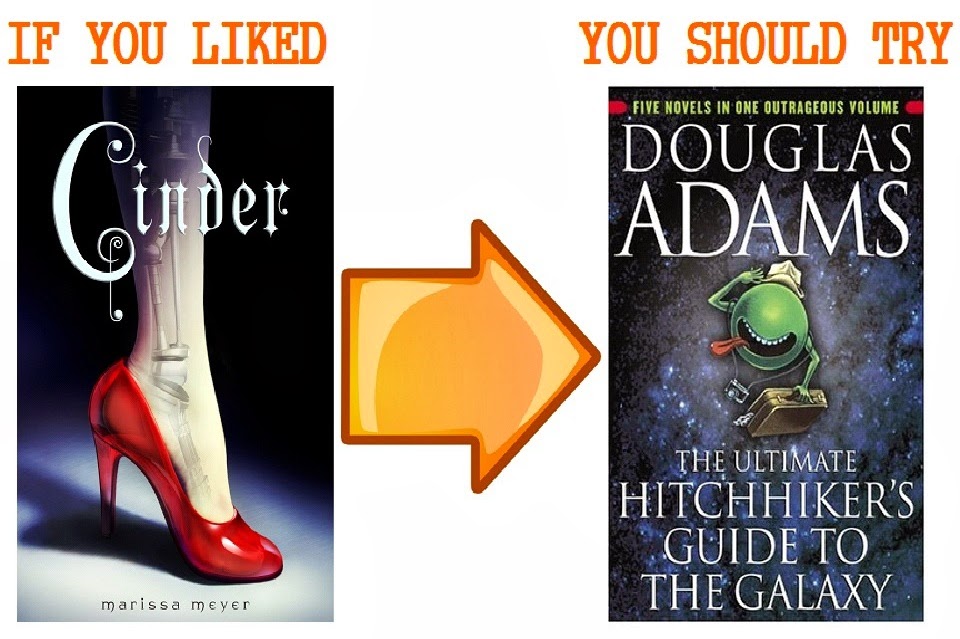 When I was reading The Lunar Chronicles by Marissa Meyer (check out my reviews of Cinder, Scarlet, and Cress) I couldn't help but think about one of my favorite series, The Hitchhiker's Guide to the Galaxy.

Hitchhiker's is a classic Sci Fi space opera and rollicking fun adventure. The five books tell the story of Arthur Dent an earthling rescued just as Earth is destroyed and picked up by a passing (stolen) spaceship captained by the President of the Galaxy, Zaphod Beeblebrox. And like The Lunar Chronicles the characters are likable and interesting. I'm a big fan of Zaphod, the idiotic lovable rogue of this tale but also Ford Prefect who's dark sense of humor and pragmatic pessimism result in him being frequently drunk. There is also the token strong female character, Trillion, and an amazing robot (Marvin, the Paranoid Android is the opposite of Iko and thinking of the two of them in the same sentence makes me so happy). The series is full of absurd humor that is both silly and sarcastic. Each of the five books stands as it's own individual story but build on the previous one to create one interesting and complicated series.

The Hitchhiker's Guide to the Galaxy is not a retelling like The Lunar Chronicles. It is without a doubt classic Science Fiction but it is meant to be funny and it reads like a parody of books like Dune and Ender's Game. The villains are caricatures, the worlds and adventures are laughable and fun, and there are so many amazing quotes and situations that you can't help but find yourself immersed in this world and it will trickle into your every day life.

If you are a fan of The Lunar Chronicles and the world and story that Marissa Meyer created then check out The Hitchhiker's Guide to the Galaxy. You won't be disappointed. If you have read The Hitchhiker's Guide to the Galaxy, what were your thoughts? Leave me a comment and the answer to the ultimate question.
Posted by My Thoughts.... Literally! at 11:28 AM

Labels: Recommending Adult Books, The Hitchhiker's Guide to the Galaxy, The Lunar Chronicles