The Maze Runner has been in my TBR pile for quite some time now. I had heard great things about it and by the sounds of it, this was the kind of book that I would enjoy with lots of suspenseful action, tons of mystery, and a world that both confuses and intrigues. I was definitely not disappointed. This book was a mind-blowing page turner.


The Maze Runner is full of action and suspense. The plot is non-stop adventure and gripping excitement that kept me entertained and on the edge of my seat for beginning to end. The book relies very heavily on its mystery and suspenseful plot points that had me asking so many questions and wondering what the hell was going on. I usually hate books that intentionally keep information to themselves but in the case of The Maze Runner it worked. We as the reader are just as in the dark on what was happening as all the characters were. I felt like I could completely empathize with them and their confusion. I was just as traumatized and curious as they were and I wanted to learn what it all meant just like they did. The main character Thomas wanted to know everything and so did I. His search for the truth kept me intrigued and interested in this crazy messed up world he was thrown in to.

As far as the world goes, it was one of the best parts of the book for me. The world-building was just fantastic! Things were revealed slowly and in a show-not-tell kind of way that is always so much more interesting. We are immediately thrust into the world of “the Glade” which is unlike any world I have experienced before. In most dystopian worlds there is an element of confusion and curiosity about what led up to the world being this way but in The Maze Runner it was like a typical dystopian world on steroids. I spent the entire book with “huh face” trying to figure out what was happening and searching for some logical explanation. This book and this world messed with my head in a way that few other things have, it was like the TV show Lost in that way. What made the world even better is the characters usage of slang words as if they had a language all their own. At first it adds to the elements of confusion but when you start to figure it out not only do you use the language but it helps you connect with the characters. 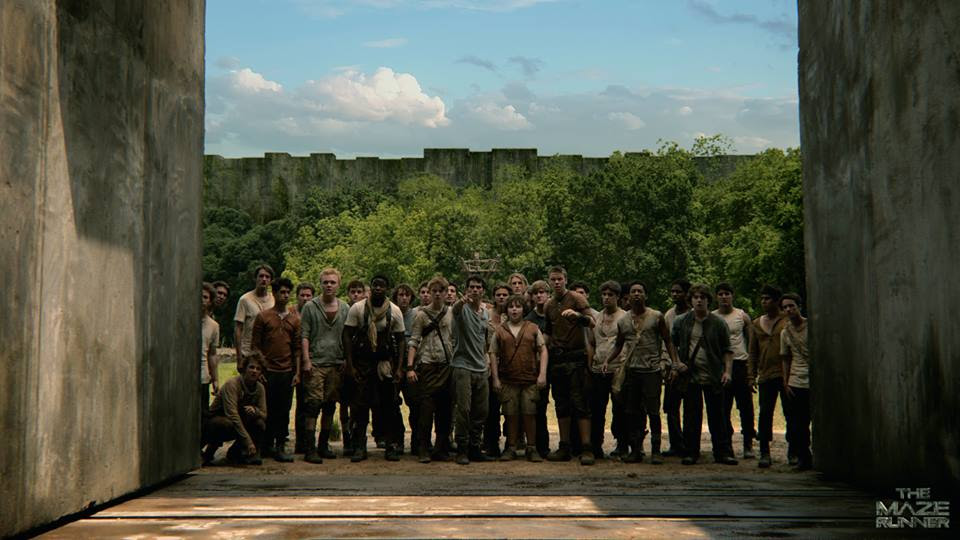 But these characters are not very hard to connect with. They are all interesting, complex, and diverse. First and foremost there is Thomas, our main protagonist. He is reckless and impulsive but it makes him endearing and likeable. He wants to know everything and he thinks the only way to find it all out is to explore and experience things for himself. His behavior gets him into a lot of trouble but he always has a way of getting himself out of it. But with Thomas there is more than meets the eye. Throughout the story he slowly learns about his past and what led him to being in the Glade and it makes him all the more interesting. But Thomas isn’t the only interesting character. The Glade is full of characters that are not entirely good or evil. They are intelligent, heroic, and strong leaders but they are also rash, ill-tempered, and selfish. But considering this fact what I found really interesting is that the book wasn’t at all character driven. Unlike a lot of dystopian books I read it was about them solving the mystery, not about them finding the strength within themselves to be heroes.

I did have one small thing that I didn’t love about the book. While the pacing was good and kept me interested, many of the plot points that didn’t occur until much later in the book felt like completely obvious solutions to me. It almost felt a little too obvious, like they were choosing the easiest possible solution but coming to that conclusion way too late for it to be helpful. I found myself thinking “well duh” more than once as the book reached its climax. But it wasn’t enough to take me out of the story. The book was still incredibly suspenseful and mysterious and I cannot wait to keep reading.

It was a fantastic and thrilling read and I would recommend it to people who like books with tons of mystery and suspense, dystopia fans, and anyone looking for a book with a crazy and interesting world. Have you read The Maze Runner? Leave me a comment with your thoughts.

If you loved the book like me head over to  http://www.theeyeofminds.com/dashner-army/ and join the Dashner Army and the newsletter for exclusive info about the author and future book plus swag and other cool things!

And don’t forget about the conclusion to the Read Along and your opportunity to win the amazing giveaway thanks to Random House Kids. Enter the rafflecopter on the Read Along Post, and link up your review for an opportunity to win the prize package and then there is one more chance to win tonight during the twitter chat under the #MazeRunnerRead hashtag at 8PM EST where we can share our thoughts about the book together. See you then!