Hosted by The Broke and the Bookish

This was actually pretty hard for me. I'm generally the type of person who likes to marathon a series. I have a tendencies to wait until they're all out before I start them. But let's give it a try.

1.) The Winds of Winter by George R.R. Martin
(A Song of Ice and Fire Book 6)
While I haven't yet read A Feast for Crows and A Dance with Dragons (which arguably could be on this list to totally pad it) but I'm choosing this book because Martin is taking FOR-E-VER to write it. As of yet it has no release date and the show will probably catch up to it making me fear that he will nit even bother writing the seventh book.

2.) The Magician's Land by Lev Grossman
(The Magicians Book 3)
Again, I haven't read The Magician King yet but I own it and have plans to read it very shortly. I actually may read it this month if I finish The Amazing Adventures of Kavalier and Clay. Most people are not fans of this series but I loved The Magicians and I hear that Q has a real transformation in book 2, which I love. When I do finish The Magician King I will want to read the third book which I will be unable to do!

3.) Rebel Angels by Libba Bray
(Gemma Doyle Trilogy Book 2)
I read A Great and Terrible Beauty last month and totally loved it. My plan was to keep reading the series but then I read the synopsis and realized that it takes place during Christmas so I decided to wait until December. What's one month... Am I right?

4.) Beautiful Darkness by Kami Garcia and Margaret Stol
(Caster Chronicles Book 2)
Again I read Beautiful Creatures last month and was pleasantly surprised by how good it was. I was also pleasantly unsurprised that there was no real ending or resolution to the story. I really want Lena to make a decision. She's supposed to claim herself, right?

5.) Pride and Prejudice and Zombies: Dreadfully Ever After by Steve Hockensmith
I really liked Pride and Prejudice and Zombies, it was one of my Road Trip Reads audiobooks (the first driving one). I didn't particularly like the ending but I'd be interested to see where this book takes the story, especially considering that it's not based on the actual Jane Austen novel anymore.


That's really all I can come up with. So instead of sequels I will now shift to series that I can't wait to get my hands on.

6.) The Grisha Trilogy by Leigh Bardugo

Shadow and Bone, Siege and Storm, Ruin and Rising This was one of those series that Amazon recommended for me and then I saw it everywhere... and I mean everywhere! People in the book reviewing community love this series (well some of them hate it). I love a good high fantasy novel. And then I heard it is set in a fictionalized version of Russia, which I love! I bought the first book online and got a super sweet deal on the second book. So I'll start this soon. Maybe I'll do a high fantasy month in January.

Another series Amazon recommended to me and everyone raves about. I got a sweet deal on the Kindle version of the first book in the series before the second book came out. It'll be a little bit before I start the series. I'm finishing the Divergent trilogy currently and it makes me want to take a break from dystopia. I'll do a whole month on dystopia soon.
8.) Ruby Red Trilogy by Kristin Gier  Ruby Red, Sapphire Blue, and Emerald Green

I heard about this series within the book reviewing community and it totally sounds like something I would love. It's like a young adult version of my favorite subgenre of literature, metahistoric romances. Plus there's time travel and the covers are super pretty. Again I bought the first book in the series to give it a try but it'll more than likely be quite some time before I actually start it. Too many books, too little time! 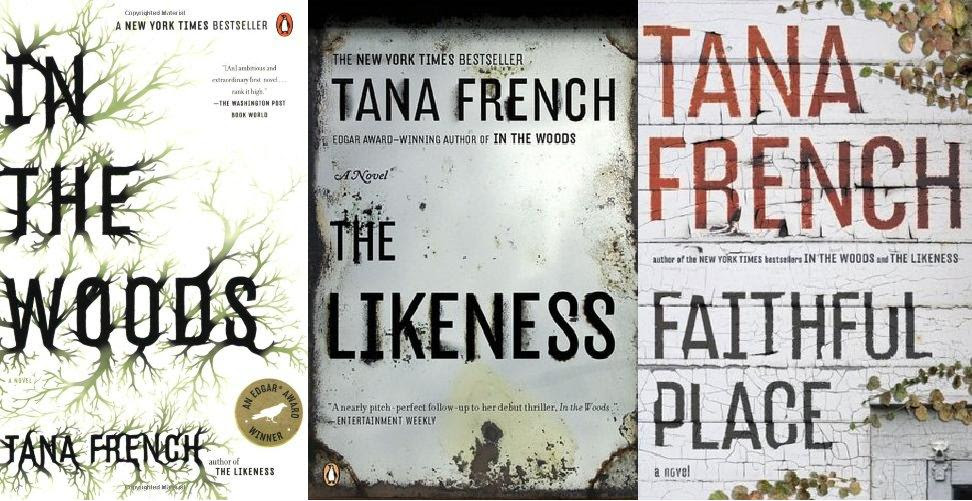 9.) Dublin Murder Squad by Tana French
In the Woods, The Likeness, Faithful Place, and Broken Harbor
These books have been on my radar for quite some time. The first book in the series was one I considered buying a million times when it was a buy one get one book in Borders (yeah it's been that long). Then I saw the second one for $2 at a library book sale so I snatched it up (the main character in this one and I have the same name).  But I can't start the series till I get the first book.

10.) Abandon Trilogy by Meg Cabot
Abandon, Underworld, and Awaken
I saw on Goodreads that one my best friend is reading the last book in the series. I love Meg Cabot (Princess Diaries WHAT WHAT!) and the concept sounds really great! I love Greek Mythology and the reimagining of the myth of Persephone into a Gothicesque romance sounds like a concept that I would love.

There you have it... the sequels and series that I can't wait to get my hands on. If you've read any of these and have thought tell me about it below in the comments. And as always... HAPPY READING!
Posted by My Thoughts.... Literally! at 11:55 AM