BEA Recap: The Most Exhausting Fun a Booknerd Can Ever Have!

If you weren’t entirely aware last week I was able to make the pilgrimage to the Mecca of authors, publishers, and books known as Book Expo America. I don’t get many ARCs normally and I have to say, I went a little crazy. I was like a kid in a candy store or that college freshman who has been so overprotected that they party a little too hard! That being said, here are some of my highlights from the week. 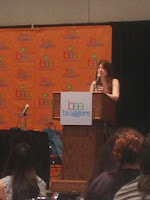 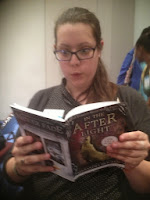 On Wednesday I headed to the Javits bright and early for Book Blogger Con. I originally sat at an empty table but decided that this was the opportunity to meet new people so I joined a table with a few fellow bloggers and met the very nice Cecilia, Marybeth, Nicole, and a few others. Everyone was very friendly and we decided to spend our meals together. First we had a Keynote with the hilarious Maureen Johnson then it was off to the panels and workshops. I learned a lot about designing the blog and how it sets the tone for the rest of the site. I will probably have a redesign coming soon. I also got to meet the delightful Kat Kennedy from Cuddlebuggery who was very sweet and friendly. Then after lunch I went to a few panels about BookTube which I’ve thought about for awhile. After the last workshop there was a little party with live music (Tiger Beat which includes the fabulous Libba Bray) and I was surprised with some books I have been looking forward to. At the party I spotted Alexandra Bracken (who was in the last panel) across the room and had a fangirl moment. She signed the copy of The Darkest Minds we had just gotten and I shared my love of Vida and my hopes for the series. She was so sweet and even hugged me!

Day 2: Where I Was Slightly Overwhelmed! 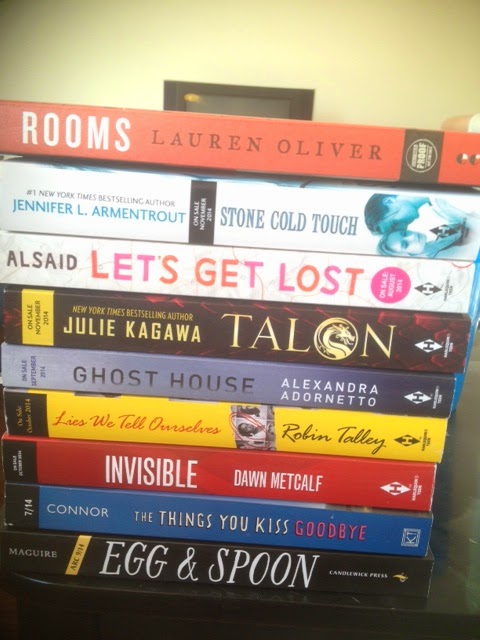 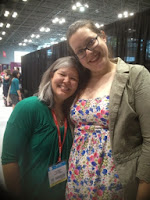 Thursday, the first day of BEA, I headed to the Javits very early because I wanted to get a ticket for the signing of Egg and Spoon by Gregory Maguire. I got my ticket and got right into the very long coffee line. UGH… That line! Seriously if you love lines, BEA is the place to be. I saw a few bloggers I recognized but was still a little shy so I didn’t really say hi, which I kind of regret. When the doors opened up I wandered around a little to get the lay of the land and saw Marybeth again, and we headed to the autographing of Rooms by Lauren Oliver. She was very sweet and we talked about creepy houses and ghosts (I may have mentioned Caspar). After that I headed to Macmillan for the Rainbow Rowell signing but they were out of tickets! But I did get to see Rainbow and took a creepy stalker pic! Then it was off to the Harlequin booth for their Young Adult signing. They were still having an adult signing so I went to a few booths to check in with their galley drops. When I got back in the Harlequin line with Marybeth I got to meet some more amazing bloggers including Elizabeth from Redhead Reader who is amazing and her husband who I waited in many lines with throughout the week! And I also attacked and met Octavia from Read.Sleep.Repeat and Nikki from There Were Books Involved (more on them later). In the Harlequin signing I got to meet some great authors including the very nice Julie Kagawa and Jennifer L. Armentrout who I shared my similarities with the characters in Don’t Look Back (and made me creeped out about people hiding in my car). By this point I was starving so I went out to the cafeteria and spotted Elizabeth so I ate lunch with her and spotted Jamie from Perpetual Page Turner who I had a quick hug with as she hustled off to a signing. After lunch I went to the signing of The Things You Kiss Goodbye and instead of going to another signing I went to Macmillan for their galley drop of Bitter Greens, a book I have been waiting to be published in the US for years. It was such an exciting surprise! I headed right to Gregory Maguire to get a good spot in line though I could have hit one more signing I was pretty satisfied with my day.

Day 3: Where I Did Better With the Signings. 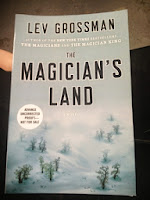 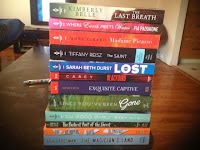 Friday I headed to the Javits a little later and decided to get coffee and a bagel along the way instead of waiting in the crazy line. Seriously you guys at the bagel carts along the way you can get a bagel and coffee for under $3. When they let us in I decided to start by stopping at the booths and get schedules so I could hit more galley drops. Then I headed to Harlequin to wait for their 10AM adult signing. At that signing I got some books I was looking forward to including The Lost by Sarah Beth Durst. After that I was hovering around Macmillan for the Landline drop when I spotted someone with The Magician’s Land, one of my most anticipated books of the year! I booked it to Penguin thinking it was just a drop but it turned out to be a signing. I had a total fangirl moment and Lev Grossman probably thought I was so creepy! I then tried to go to two drops I had missed and they were both out so I headed to the signing of Blackbird and chatted with Anna Carey about second-person narratives. I noticed that while there are so many signings at one time so if you walk by and see a line that’s not too bad you can go to multiple signings at the same time, I got Since You’ve Been Gone and The Betrayers that way. By that point I was starving so I went to get a $10 to go with my sandwich (seriously bring food, a $3 banana is a rip off!). After lunch I went to a drop at HarperTeen who made me pick between three books I wanted, I know it’s a little overly dramatic but it was like Sophie’s Choice! Then it was off to Holly Black signing and oh god that line was insane but everyone was so nice. I then jumped into the Heather Demetrios line where I met Kim from The Midnight Garden. We had a whole conversation about how amazing Sansa is in A Song of Ice and Fire and how one day the "Sansa haters" will eat their words! When I met Heather we talked about magical systems a little bit and she said I was dressed “jinni chic.” From there I headed to a few more drops and my feet were throbbing! I had planned to go to the Book Blogger picnic but my aching feet, the prediction of rain, and the idea of going downtown when I had to head back uptown sounded very unappealing but I totally regret this decision. But I did find a great shuttle bus that took me to Grand Central so I didn’t have to walk! 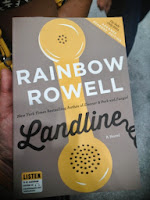 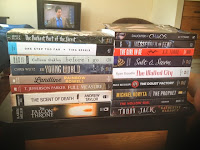 So after two days I thought I had it all figured out and then BookCon happened! There were twice as many people in the same space and the BookCon side was like a layer of Inferno unknown by Dante, it was that hellish! So I spent most of my morning on the BEA side in a few “not a line lines” at HarperCollins. These lines all included Octavia who is a fantastic front of the line person and the fabulous Nikki. We spent most of the morning chatting and directing others where the lines started. Then when I was at Macmillan I had a great chat with someone who I told I missed out on Landline twice and she informed me they were having a BookCon panel where there were ARCs available so I braved that side of the floor and got a copy! I then headed to Little Brown to meet up with Octavia and Nikki for their 11am and Noon drops. The noon drop was totally insane and I barely escaped with my life but I got a copy of Salt & Storm. Thankfully Octavia was in control of the stampede and pulled us through before it got out of hand. I can’t wait to spend more time in line with these two next year! From there I headed to the bathroom, but my slightly hidden bathroom ended up being right by the BookCon side making me so late for the Dorothy Must Die signing I ended up giving up knowing I wouldn’t get a copy (also the line overtook my spot when I was talking to Elizabeth). So I hid in a corner of the floor until my last signing of the day, Jen McConnel who was lovely and sweet. As I was on my way out a woman offered me a free slice of pizza that I gladly took! It was a great way to end BEA!

Then on Sunday I headed back to Pittsburgh with my mind full of memories and my car full of books! 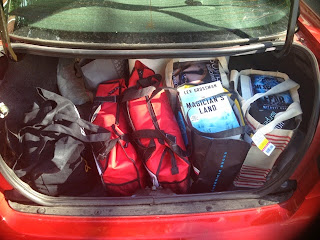 It was insane, overwhelming, and exhausting but I loved it so much!  I think the only thing I regret is not saying hello to more bloggers earlier. It was so great meeting the people I did but there were a few folks I would have liked to have met or talked to more. I also wish I had talked to more publishers when there wasn’t crazy galley drops. The last day I realized that they are all very nice and want to chat about their books if it isn’t mass chaos. I also wish I had taken more pictures. After the first few days I just sort of stopped taking them. It was great staying in the Bronx with my brother because it was free and I could relax in the evenings but it definitely made me antisocial, I wish I was able to hang out more. I will definitely be going back and now that I know what I’m doing I’m very excited.

Did you go to BEA? What were some of your highlights? Leave me a comment with your thoughts
Posted by My Thoughts.... Literally! at 10:21 AM