#ThrowbackThursday... Before I Blogged I Read The Luxe Series by Anna Godberson


I first saw the idea for this post from Jamie at The Perpetual Page Turner’s Blog. I love this concept.  My blogging over the past few years has been very subpar. I’ve read a lot of books that I want to talk about and discuss with people but I never wrote anything about them on here. So I am adopting the concept and making it coincide with Throwback Thursday, because it just makes sense.

My first pick is The Luxe Series by Anna Godbersen. It includes The Luxe, Rumors, Envy, and Spendor. The series is Young Adult Historical Fiction and Romance set in New York City at the turn of the 20th Century. But it’s not your average Historical Romance, its Gossip Girl in petticoats and corsets.

I initially started the series in 2008 when I worked for Americorps. I brought the book to a retreat I was attending and I ended up leaving it there. I wasn’t too brokenhearted because I wasn’t totally in love with the series at the time. It was good not great. The Luxe suffered from what I call “First Book Syndrome.” It spent a lot of time just setting things up that weren’t going to develop much later. Then I was again reminded of the series in 2011 when I was at a Border’s that was closing (a moment of silence for Border’s) and I picked up the second book in the series for $2 when I was travelling for work. I started it but never finished it because it was again a little slow. Then when I was moving to Pittsburgh I realized I had a substantial amount of books that I half read and so I picked it back up determined to finish it and I devoured the rest of the series.

I will try and make my review as spoiler free as I can but that is often difficult when you are trying to review an entire series.

In The Luxe we are introduced to the myriad of characters that are the centerpiece of this series. First and foremost are the Holland sisters. Elizabeth, the elder sister, is the darling of the high society set. She wants nothing more than to please her family and is a perfect and demure young lady. This is in contrast to bold and brash Diana, her younger sister, who has a bit of a rebellious streak and does not want to be the kind of lady that her place in society dictates. The Holland’s father died leaving them bankrupt and Elizabeth is forced to marry Henry Schoonmaker. The Schoonmakers are the wealthiest family in the city and Henry is known as a bit of a cad, a womanizer, and kind of a drunk. Henry and Diana meet when he comes to the house to meet Elizabeth and they are instantly smitten with each other and find kindred free-spirits in one another. To complicate things further we have Penelope Hayes, Elizabeth’s best friend. She is a member of an upstart new money family who had a fling with Henry and is still in love with him. She’s jealous of Elizabeth and will do anything to get Henry to marry her instead. As if that weren’t complicated enough Elizabeth is actually in love with William Keller, the Holland’s coachman, who she grew up with. He is also in love with her and wants to run away and start over in the West. The Holland’s maid Lina is desperately in love with Will and extremely jealous of Elizabeth. The characters are scheming and plotting against one another for their own personal gains by spreading salacious rumors to each other and in the press. 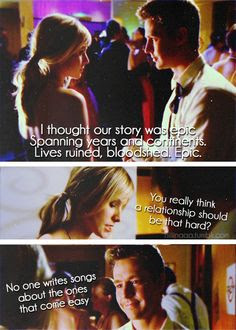 As the love hexagon may lead you to believe this is not a typical romance. There is no insta-love that you see a lot in these kinds of stories, Young Adult romances often being the most guilty of this phenomena. If you don’t get that then you get the “love can conquer all” trope that feels so disingenuous. In the case of The Luxe series there is the idea that your first love isn’t necessarily your only love, which is a concept I think more YA romances need. It was incredibly refreshing and I loved it. The romance in this series was dark and a little torturous. They were EPIC in the Logan Echolls sense of the word. They spanning years and continents, ruined lives, bloodshed. EPIC!

My favorite part of the series was probably the characters. Anna Godbersen created a host of deep and complex characters who live in the grey area between good and evil. There is no clear villain and no clear hero of this story, all the characters were scheming and plotting against one another for their own personal gain. I think it’s a testament to the writing that I didn’t actually like the character that was arguably the most villainous. They were all very different and interesting and had elements that made you like them and dislike them at the same time. And while they could have very easily fallen into the stereotypical, from the beginning it really seemed like they were going to, but they were all full of surprises. The biggest surprise among them was the Holland Sisters. They are both hopeless romantics and have a bit of a Sense and Sensibility vibe but things do not turn out in the way you expect for either of them. As the series goes on they both become strong female characters who learn to do what they want instead of what is expected of them. They become quite the feminists and they do it all in fancy dresses!

The uniqueness of the characters is further developed by the fact that each chapter is told from a different character's perspective. And while that can often make a story muddled, in the case of this series it worked to move the plot along in a steady and interesting pace. It gave each chapter a unique voice and never left you wondering about what someone was thinking or feeling. The character's lives intertwined in such an intricate way the story was improved by the multiple perspective approach. It also added to the fact that you empathized with even the most malicious of characters because you learned their deeper motivations.
The situations that the characters are faced with, while they are taken directly from the issues young people were faced with during the specific time period, also felt like issues people today are faced with. These included concepts like family dynamics, love and marriage, friendship, responsibility, and feminism. These ideas can often devolve and end up being too fluffy but this series walked the line brilliantly. It’s something I think everyone can relate with particularly young women.
If you are going to read this series, and I recommend you do, my suggestion is to marathon it. Only the first book feels like a unique story. For the rest of the series they build on one another to create one larger narrative full of intrigue and surprises. Forewarning, the ending is not at all happy, it’s very bittersweet but it’s more satisfying than a happy ending would be. And don’t give up after the first one like I did, they get better and better as it goes on building to a big crescendo in the ending that leaves you incredibly satisfied.

I recommend this series to anyone who likes Historical Fiction, realistic romances, characters that are both good and evil, or strong female characters. This series is one of my favorites and Splendor was one of the best books I read this year. If you’ve read it already let me know your thoughts in the comments section, and if you haven’t check it out!
Posted by My Thoughts.... Literally! at 1:45 PM

Labels: Anna Godbersen, Before I Blogged I Read, The Luxe series, Throwback Thursday