I cannot adequately explain my feelings for this book. Words do not do it justice. I could attempt to explain all the wonderful things but that would ruin a lot of the book for you. All I can say is read it, it's fantastic.

First thing you need to know about this book is that it's Historical Fiction set during World War II. I am a big fan of Historical Fiction but this is not one of my favorite time periods to read about. The books tend to be focused on one particular part of the period and while that is an interesting subject matter that stirs up emotions and thought-provoking analysis of the time, one can only read those kinds of stories so many times. But Code Name Verity takes a very different look at the period. We follow two women who are breaking out of the female status quo and helping the war effort. You really get a sense of what things were like for those fighting in the war and aiding with the war effort. The feelings of fear, uncertainty, and simultaneous desire to do something valuable.

Our main characters, Maddie and "Verity" are incredibly likable protagonists and MCs. The heart of this story is their relationship and it's a powerful one to read about. Both women are spunky and tough but with a softer side. They are faced with a lot of adversity throughout the book and they handle it in stride and with so much inner strength. I found myself surprised at how deeply invested I was in the characters and their success. In addition to our two heroines there was also a host of interesting and complex secondary characters that filled out the varying world in which the protagonists operated.

But what mostly made this book so fantastic and hard to talk about is the plot. It is a really hearty book with so many layers that it seems longer than it's 300 odd pages in a good way. It starts out a little slow but before you know it you will be emotionally invested in what happens next and will find yourself staying up later than you want to reading and unable to focus on anything else because you are fixating on what could possibly be happening in Code Name Verity. You will laugh, you will think, and you will cry! The feels in this book are extreme!

I would recommend Code Name Verity to fans of Historical Fiction, especially if you like WWII stories, and anyone looking for an emotional book about friendship.

Yesterday after finishing Code Name Verity the day before I had the amazing opportunity to attend an event with Elizabeth Wein hosted by the Carnegie Library of Pittsburgh. Elizabeth was so sweet and gave an amazing lecture where she talked about her writing experience and what inspired her to write Code Name Verity and Rose Under Fire. 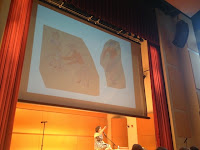 She said that she had been writing from an early age including as she puts it, "what I now recognize as fanfiction" for Little House on the Prairie. She also wrote mystery and adventure stories with her childhood best friend in Jamaica, a girl named Anna who she is still friends with today. Then she told us about how she started working on her first novel when she was in high school and didn't follow the tradition path of writing a series and working on your next book when the first one is being published. 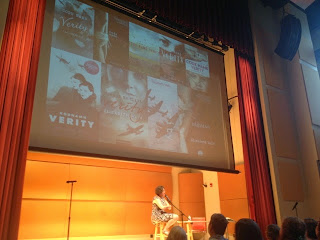 It was great to hear about her writing journey but I was even more excited to hear about what inspired the books. Elizabeth said that a lot of it was influenced by her personal experience, most notably moving to Scotland (where she lives five minutes away from a castle that Craig Castle is based on) which is steeped in WWII history and learning to fly.She then said what brought it all together was a story she wrote when she was a kid inspired by her French teacher who was involved in the resistance movement. She that she wrote Code Name Verity quickly because it felt so familiar.

Then she talked about some of the real women who inspired Verity, Maddie, and Rose. Some pilots, some authors, and some artists but all of them showing tremendous strength in the face of adversity. She also mentioned her time researching and visiting Ravensbruck and how when she wrote Code Name Verity that part of the story of the real ATA pilots and members of the SOE. 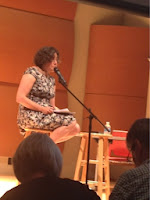 It was great to learn about the real women who inspired the story and I can't wait to read Rose Under Fire now. She even mentioned some spoilers and then apologized saying she doesn't think knowing how a story ends ruins the experience for her. A woman after my own heart! I think she would like my Why I Like Spoilers video.

After the talk I got to meet her and have my book signed. I told her how I just finished and she replied, "then you must still be traumatized." I was. We then talked about crying on public transportation and how it can sometimes be a little awkward. It was a great talk and I was so glad to have gotten the chance to meet her and listen to her speak. Special thanks to the Carnegie Library of Pittsburgh for bringing her here!
Posted by My Thoughts.... Literally! at 9:18 AM