Celebrating Banned Books Week with Before I Blogged I Read: His Dark Materials by Phillip Pullman

I'm sure that many of you know that this week is "Banned Books Week" here in the US. The week where we celebrate all those books that get challenged for their content and themes which are "unsuitable" and should therefore not be taught in schools or even for sale according to some people. Many of the books which have shaped my upbringing and view of the world are in fact "banned books" so for today's Throwback Thursday and in honor of Banned Books Week I have decided to review one of my favorite banned books/series... 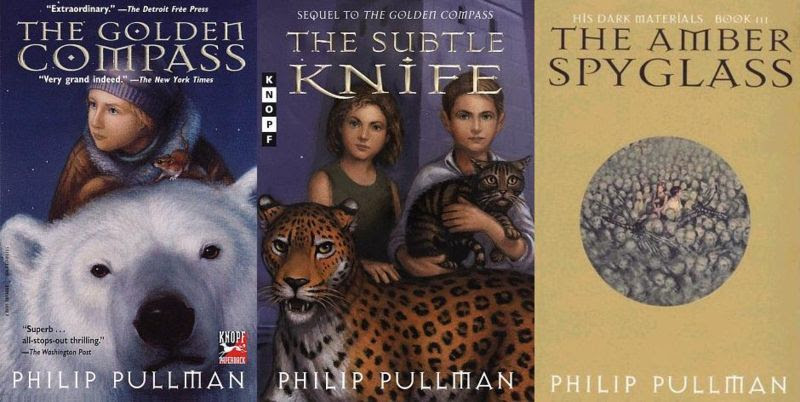 His Dark Materials by Phillip Pullman. You may also know this as The Northern Lights trilogy or by the first book in the series which became a movie, The Golden Compass. It is an incredible Middle Grade/Young Adult Fantasy series with interesting and complicated characters, a thrilling and mysterious plot, and a complex and interesting world that develops with each passing book.

One of the things I love about this series is that with each book it takes on a very different tone as it explores a different subgenre or trope in Fantasy novels. In The Golden Compass the series seems like it's your typical YA/MG High Fantasy adventure story. Our plucky heroine Lyra Belacqua goes on a mission to find her lost friend with the help of some interesting and unlikely characters (more on them later). Then at the end of the book we are left with a cliffhanger. This leads us to book 2, The Subtle Knife, which takes a more Science Fiction feel as it takes place in multiple worlds. Then in the final book in the series, The Amber Spyglass, we get the end of the world epic fantasy vibes that the Fantasy genre has been known for. But this is not your typical story of good versus evil. 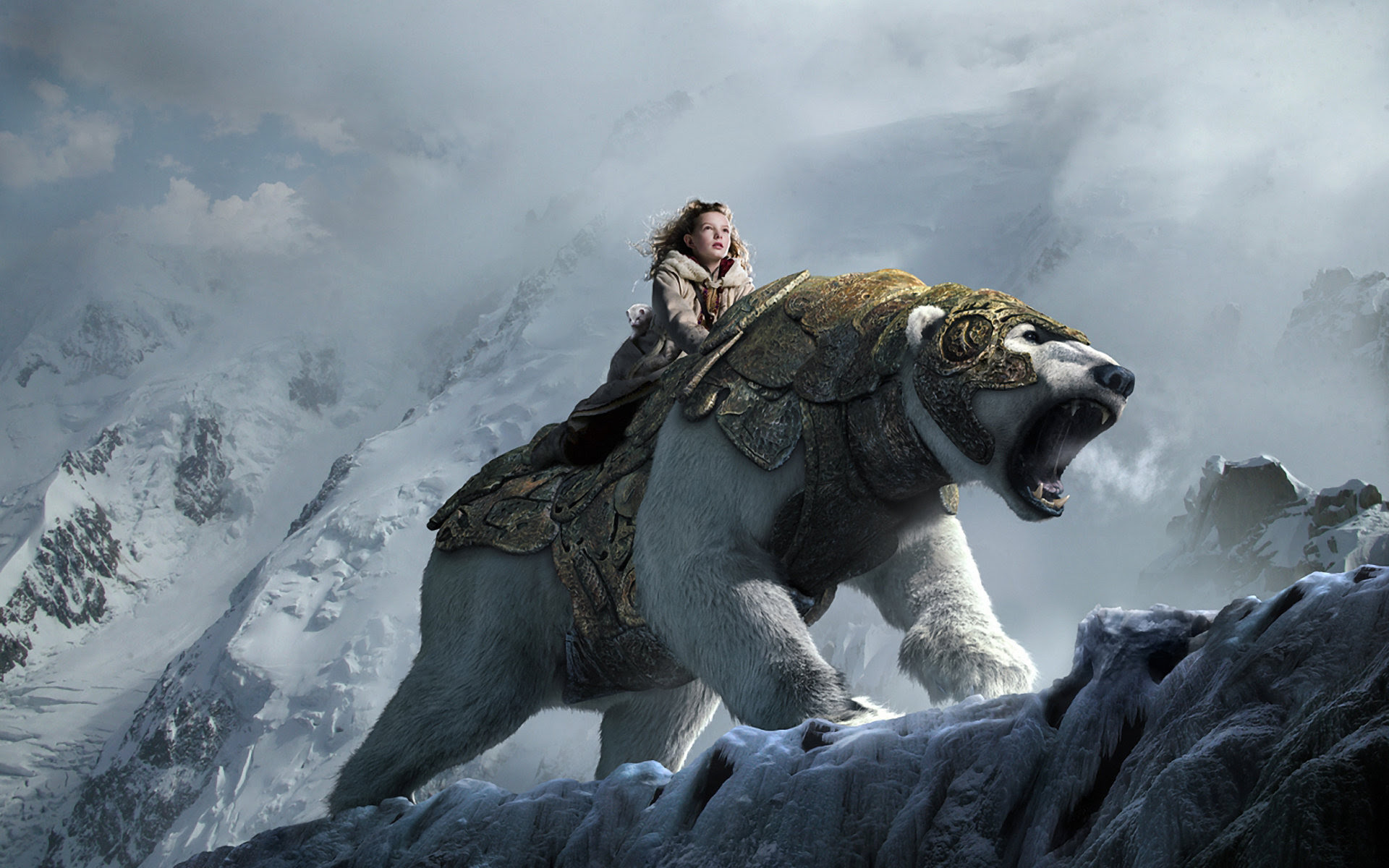 Much of this series breaks with the fantasy tradition of good and evil and nothing communicates this more than the characters. What you would usually think of as an evil entity is good in this series like witches and a race of militarized bears (seiously the armored bears are totally kickass!) are supportive and helpful to our heroine and her goals. And those that you would usually think of as good are the more diabolical entities in this world like angels and the Magisterium, the church like entity in the world. And then there are the individual characters, many of whom walk the line between right and wrong and your opinion of them changes often throughout the series. Most, if not all, of these characters are manipulative and care more about their own self-interests than those who they claim to love and care about. In the first book the best example of this is Mrs. Coulter & Lord Asriel who use Lyra to prove their points in their church versus state argument and their science versus religion argument. They put her in all kinds of compromising positions and even attempt to turn her against the other person. Then later in the series we have Balthamas and Baruch, angels who are doing the same thing yet interestingly enough, to characters who had previously been the manipulators. And I can't even begin to talk about the dubiousness about the god-like entity in this series (I'll attempt to later).

Even the main characters, Lyra and Will, are far from perfect. Lyra, the ultimate heroine of the series, is your typical strong female characters. When we first meet her she is a tomboy who would rather be running around the roof with the gyptian children than being a proper "young lady." She is intelligent and curious but she often uses her quick thinking skills to manipulate people and is a notorious liar. Her lies and manipulations do get her out of many a tricky situation that her impulsiveness got her into in the first place. Her Hero's Journey in this series actually leads to more corruption than anything else. It all makes her rather dubious and you guys know how I feel about dubious characters. Will on the other hand is arguably Lyra's polar opposite (comment if you get that pun). He is honest and kind and unlike Lyra who is in a perpetual state of childhood, he has had to grow up too quickly. He has a strong sense of right and wrong but still often does things that breaks with his moral code. But as they say opposites attract and I totally ship Lyra and Will. They are great well-rounded characters that make this series interesting.

What is perhaps the most interesting thing about this series however is the world. The Golden Compass begins in a High Fantasy version of Oxford. It's a steampunk kind of Victorian world with zeppelins and interesting gadgets that run via a supernatural force. But there are also daemons! And I don't mean this is the usual sense of the word (just another dichotomy in this sereies). This is the absolute coolest thing about Lyra's world. Every person has their soul manifested as a talking animal that follows you around. As a child your daemon changes shape and then when you become a teenager is settles into something that best represents you. Lyra's daemon Pan is not only one of her best friends but also tries to act like her conscience throughout a lot of the series. As the series goes on we learn more about the larger world. We see how it's connected to our world and we travel between worlds to some interesting places. And then there's this world's view of the afterlife. It is reminiscent of Greek mythological views on the subject and the storyline that takes place there are quite creepy and interesting.

But that probably explains the plot of this book pretty well, interesting and enthralling but quite creepy. I've already given a little explanation about each of the books in the series and some of it's themes. What this series does really well is combine classic fantasy adventure with mystery and plot twists and larger themes about humanity and society.Throughout most of the book, as the reader, you are easily along for the ride as Lyra and later Will go on their missions to save someone or something. You enjoy exploring the world and meeting new characters. But along the way there are so many questions about what is happening in the world and why. It is all a little unsettling at times as it makes you question what you thought was good and real about society as you know it. Phillip Pullman throws in ingenious plot twist after ingenious plot twist keeping you on your toes and questioning things. There's a great sense of mystery with the adventure of the series. But the really interesting and unsettling thing about the plot and themes of this series is the reasons why it is listed among the banned and challenged books, its themes about science versus religion, biblical allegories, and criticism of organized religion. Lyra is this prophecized girl who will bring about the downfall of the Magesterium, a religious and governmental entity in her world who we learn throughout the series is doing some not so great things in the name of their religion. It definitely takes a very critical look on the subject of religion, pointing out it's flaws and making it and even the higher power working in the world the ultimate antagonist of the story. Pullman expertly crafts an antagonist out of something you usually see as being positive. It's sort of the ultimate contradiction where you are rooting for a person who is probably doing something not very good and while it is unsettling to think you support them, they really do seem to have the right idea. Part of Lyra's prophecy is that she is a "second Eve" or the "betrayer" that will lead to "an end of death" or a sort of second original sin. It is definitely the kind of book that could offend someone who is more religious. However when taken on it's storytelling and as a fantasy novel, it's quite incredible.


I give the His Dark Materials by Phillip Pullman series 9.5 out of 10

It's a complex and interesting series with complex and dubious characters, a creative and engaging world, and a interesting and mysterious plot that combines fantasy elements with a criticism of society and religion.