I've very recently fallen in love with comic books and graphic novels. I almost feel like I have leveled up my nerd cred with this move. But being pretty new to comics and this world I haven't yet dived deep into the world. However I thought I would share a few I have read recently.

Kamala Khan is an ordinary girl from Jersey City — until she's suddenly empowered with extraordinary gifts. But who truly is the new Ms. Marvel? Teenager? Muslim? Inhuman? Find out as she takes the Marvel Universe by storm! When Kamala discovers the dangers of her newfound powers, she unlocks a secret behind them, as well. Is Kamala ready to wield these immense new gifts? Or will the weight of the legacy before her be too much to bear? Kamala has no idea, either. But she's comin' for you, Jersey! 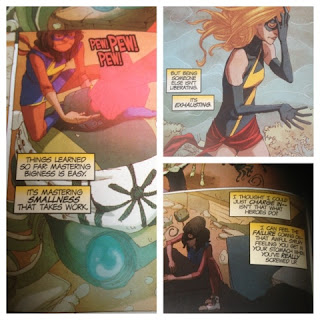 How much do I love Kamala Khan? So much. She is an absolutely fantastic heroine. Not only is she a Muslim-American female, but she's also just your average nerdy teenager who is oobsessed with The Avengers and is just trying to figure out who she is when she ends up with superpowers. Dream come true, right? Except Kamala learns pretty quickly that getting powers isn't all it's cracked up to be. She makes all kinds of mistakes and you can't help but connect with her for that reason. And because of that her successes are all the more empowering.

What I also love about the new Ms. Marvel is that it's not a reboot. Kamala Khan is not Captain Marvel, she's something entirely her own. The comic takes inspiration from some of the things happening in the Marvel universe at the moment but it's a unique and interesting story. It of course takes inspiration from the classic story and has Easter Eggs and references that fans will appreciate but you don't have to be a big reader of comics to enjoy Ms. Marvel. It'd be a great introduction to the world. 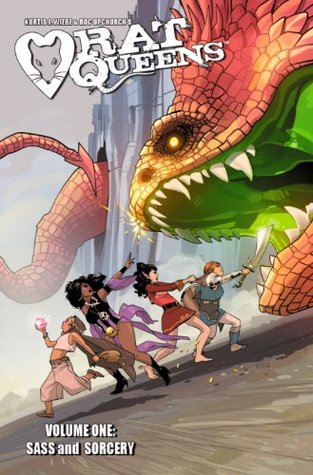 A pack of booze-guzzling, death-dealing battle maidens-for-hire, and they're in the business of killing all god's creatures for profit. It's also a darkly comedic sass-and-sorcery series starring Hannah the Rockabilly Elven Mage, Violet the Hipster Dwarven Fighter, Dee the Atheist Human Cleric and Betty the Hippy Smidgen Thief. This modern spin on an old school genre is a violent monster-killing epic that is like Buffy meets Tank Girl in a Lord of the Rings world on crack! 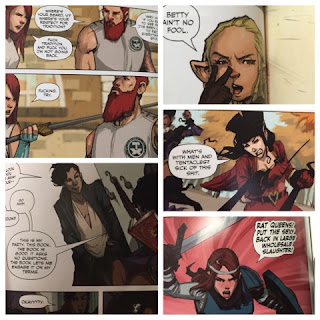 I absolutely devoured the first volume of this comic. The Rat Queens are everything you could ask for in a female  adventuring group. The first volume is entitled "Sass and Sorcerey" and that is exactly how I would describe this book. The general plot is full of mystery and adventure that fans of traditional fantasy will love. I mean the amount of magic and action here rivals any "sword and sorcery" I have ever read.

And the sass comes from these amazing ladies that make up the Rat Queens. Every last member is so interesting and complex. They have complicated backstories that the book has only begun to touch on but they are also some amazing ladies that you really love watching kicking ass and taking names. And the thing is , you guys probably know that I don't like the femme fatale trope and I also hate when female characters are seeing as being feminist by subscribing to traditionally make roles. The Rat Queens walk that fine line beautifully. Plus they're just really likeable. If you asked me who my favorite character is I wouldn't be able to answer because I think they're all equally amazing. 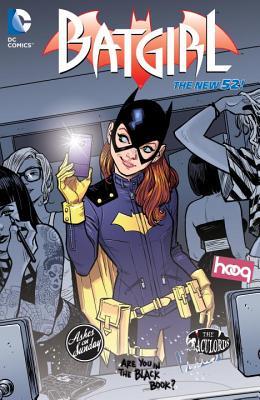 Batgirl by Cameron Stewart, Babs Turner, and Brenden Fletcher
Vol. 1 The Batgirl of Burnside
(Amazon / Goodreads)
Synopsis: Barbara Gordon is no stranger to dusting herself off when disaster strikes, so when a fire destroys everything she owns, she spots the opportunity for a new lease on life – and seizes it! Following the rest of Gotham City’s young adults to the hip border district of Burnside, Barbara sets about building an all-new Batgirl…and discovers new threats preying on her peers! As the new hero of Burnside, Batgirl gets started by facing twin sister assassins on motorcycles! Collects BATGIRL #35-40.

My Thoughts
As I said in the beginning, I recently became a comics fan. So looking at this new Batgirl from a purely objective perspective I can say that I liked it. This Baraba Gorden is a post-modern hipster who has recently moved to the Gotham equivalent of Brooklyn for school and quickly becomes it's very own caped crusader. But she also has to navigate the celebrity persona that comes with it using social media and other Very modern concepts. I did found the concept fun and lighthearted and incredibly engaging.

And while I think veteran fans of the comic may not enjoy this new twist it's not necessarily a comic for newbies either. It didn't feel like an entirely different story and I felt like I was jumping into something already in progress. It was a little hard to follow what was happening with the general plot of the story, especially where the villain was concerned because I didn't have the background so I had to look up the spoiler riddled Internet for that info. 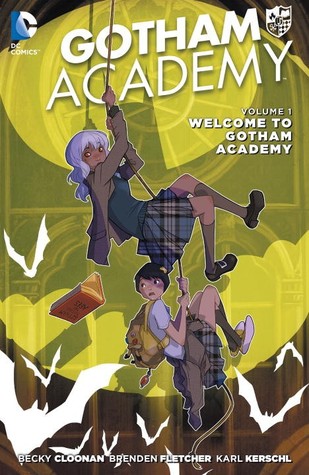 Gotham Academy by Becky Cloonan, Brenden Fletcher, Karl Kerschel
Vol. 1: Welcome to Gotham Academy
(Amazon / Goodreads)
Synopsis: Gotham City's most prestigious prep school is a very weird place. It's got a spooky campus, oddball teachers, and rich benefactors always dropping by...like that weirdo Bruce Wayne. But nothing is as strange as the students!

Like, what's up with Olive Silverlock? Is she crazy or what? Where did she go last summer? And what's the deal with her creepy mom? And how come that Freshman Maps is always following her around? And is she still going out with Kyle? P.S. Did you hear the rumor about the ghost in the North Hall?! 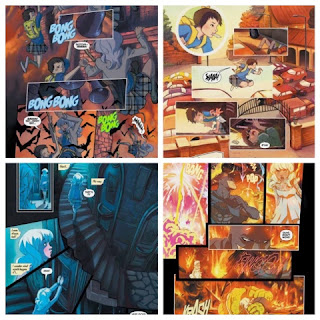 This is a comic I would recommend for someone who hasn't read a lot of comics. It has the same dark tone as Batman and while he does make a cameo, it's really it's own unique story. It feels like some of the YA mysteries that I enjoy with tons of suspense and intrigue with complex and like able characters with interesting backstories he comic has only touched on it's first volume.

But I think the best part of Gotham Academy is the art. It's one of the most intricately drawn comics I have seen in my limited experience. It's not just a bunch of panels put together, it's full pages with as much going on in the background as it is in the foregrounds. It draws the eye and captures the imagination in a truly fantastic way.

And those are all the comics I have read in the past few months. Have you read any of these comics? What did you think? Do you have any comics or graphic novels that you would recommend to me? Leave me a comment with your thoughts. Thanks for stopping by and HAPPY READING!
Posted by My Thoughts.... Literally! at 10:30 AM