Because of Their Survival Skills
I mean if you are stranded on deserted island the most important thing is surviving. I know very little about how to hunt, search for food, or build a shelter. I'm basically hopeless. I'll need these characters to help me survive.

1.) Katniss Everdeen from The Hunger Games by Suzanne Collins
Homegirl is a pro at surviving in the wilderness and could teach me a thing or two about that sort of thing. She survived two hunger games and has been providing for her family for years, I would have no shame about letting her provide for me. Plus she's pretty anti-social and I can only take so much human interaction.

2.) Mal from The Grisha Trilogy by Leigh Bardugo

He's an expert tracker, has survived on the run with Alina a few times, and could help me survive on a deserted island. But let's be entirely honest, this choice is all about the eye candy and the fact that he's really high up there on my list of book boyfriends. #TeamMal

3.) Liam from The Darkest Minds by Alexandra Bracken

For years Liam survived on the run providing for himself and others and he could definitely help me survive. Plus he's just a genuinely nice and supportive guy that would be great company if you are trapped on a deserted island.

4.) Taylor Renee Crystal Hawkins
from Beauty Queens by Libba Bray
I would settle for being stuck on a deserted island with any of these characters. They really made the best of a bad situation and pretty much created their own society. But the best at survival and the most entertaining was definitely Taylor aka "Miss Texas." That girl knew how to survive on an island in style!

They Will Be Good in Case of A Fight
You never know what you're going to encounter on a deserted island. I've watched to much Lost to not be prepared for anything. I mean it's supposed to be deserted but what if it's not? I need someone to be there in case of an attack by a wild animal or worse...

4.) Four from Divergent by Veronica Roth
Four has pretty solid fighting skills and would definitely be prepared for anything the island were to through at us. Plus he has great survival skills, and is incredibly easy on the eyes. And like Katniss he's not much of a talker and that's the kind of island companion I would want.

5.) Jamie Lannister from A Song of Ice and Fire by George R.R. Martin

Jamie is pretty good with his sword (thumbs up for the double entendre) and would definitely be prepared for anything on the island. Plus him and Brienne did a pretty good job surviving. And he'd be great company with his self-deprecating sense of humor and stories about Kings Landing!

6.) Captain Thorne from The Lunar Chronicles by Marissa Meyer
So I usually hate when people think that just because it's called a "deserted" island it must have a desert. But in case it does have a desert, I want Thorne there to help me get through it. Plus he would be amazing company and so much fun to be stuck on an island with. Maybe we'd even make a daring escape!


Because of Their Magic Skills
Being stuck on a deserted island it would be great to have someone who is able to do magic. The spells or ability to control the elements would come in really handy! 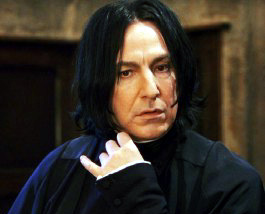 7.) Severus Snape from the Harry Potter series by J.K. Rowling
So Snape is always my choice of who to be stuck on a deserted island with and I can't really explain why. I mean there is the magic ability and that he can make all kinds of crazy potions with whatever plants and stuff are on the island. But really I just think he could use a vacation, a little sun, and some good company.

8.) Percy Jackson from Percy Jackson and the Olympians by Rick Riordan
If you are stuck on an island the best thing would be to be there with the son of the God of the Sea. Not only could he control the oceans but he can also communicate with the denizens of the sea and convince one of them to rescue us. Plus he would be great company.

Because They Would Be Great Company
Sure helping me to survive or helping me to fight would be great but if I'm stuck on a deserted island with a literary character I'd want someone who would be fun to hang out with.

9.) Levi from Fangirl by Rainbow Rowell
Levi would be amazing to share an island with. He is sweet, fun, and excellent company. Plus he's a farm boy so we could maybe plant some crops or keep livestock. And then there's the fact that he's easy on the eyes. And maybe if there is some coffee beans on the island he can make one of those fancy lattes for me!

How about you? Who would you want to to be stuck with on a deserted island? Leave me a comment with your thoughts.