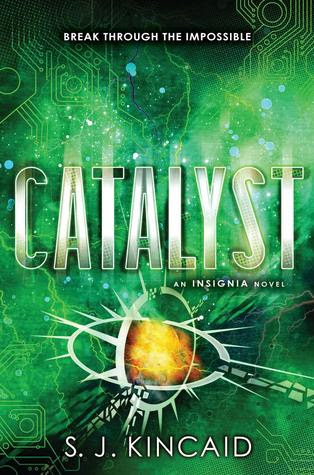 Synopsis: S. J. Kincaid has created a fascinating dystopian world for Insignia, her futuristic science-fiction adventure series perfect for fans of Ender's Game. Earth is in the middle of WWIII, battling to determine which governments and corporations will control the resources of the solar system.

Teen Tom Raines grew up with nothing, some days without even a roof over his head. Then his exceptional gaming skills earned him a spot in the Intrasolar Forces, the country's elite military training program, and his life completely changed. Now, in Catalyst, the explosive series conclusion, dangerous changes have come to the Pentagonal Spire, where Tom and his friends train.

When a mysterious figure starts fighting against the evil corporations' horrifying plans, but with methods Tom finds shocking, he must decide which side he's on. With slim odds of success, is it even worth the fight?

This is a series that keeps getting better with each passing book. And while I really wanted to love this one because of some great parts, it still fell a little short for me. It did have great character development and an interesting Science Fiction world but some problematic plot and pacing.

My favorite thing about this series is the world that S.J. Kincaid has created. I've loved seeing her use of technology, virtual reality, and space travel as a way of fighting the next world war. In this book we get to spend more time exploring and learning about this world and it's technology. But what this book did really well is remind me about the fact that dystopia is a subgenre of Science Fiction. This book definitely had more of that political intrigue that you see in dystopia, the us vs. an oppressive government and/or business kind of theme. And what I loved about this book, and this series, is that unlike a lot of series the focus of the world has narrowed. On top of the fact that it really became about one villain, it felt very high-stakes and like a "we have to save the world" kind of story. I really enjoyed the smaller focus and single diabolical antagonist. It gave me something to root against.

But despite the fact that the focus of the world narrowed and I liked the high-stakes nature of the plot, it felt very muddled. This is the longest book in the series at 432 pages, and despite that I've breezed through 800 page books and read 1000 page books without batting an eye but these 400 pages felt like a chore at times. And maybe that was the plot and pacing was a bit of a roller coaster. Being the final book in a series there were tons of huge reveals but they were always followed by a period of slowdown. I think my major issue with the plot however, was that it felt like two or three very different major storylines shoved together. Sometimes it worked, and in the end it all did served a purpose, but while I was reading it felt a little jarring and confusing.

My favorite part of this book may have been something that previously I did not like about this series, and that was the characters. This book had some amazing character development. I don't know how it happened but it was as if a switch was flipped and suddenly the characters were likable and I could empathize with them. The main character of Tom in particular had a great redemptive arc. He went from being a character who's choices I didn't understand to a character who made the tough decision for the right reasons. But he wasn't the only one. I found myself cheering for characters I had previously not liked and empathizing with characters that I previously found grating. S.J Kincaid did a great job of developing these characters just befor they were faced with serious adversity, further cementing my attachment to them. Maybe it was because over time they grew on me or maybe something specific changed, but in Catalyst I really loved these characters.

All in all this was a good ending to a series that I did enjoy. A lot of the things I didn't like about the series were not issues in this book and with a thrilling world, likable characters, and an action-packed plot it was a good read.

Buy/Borrow/Bypass: Borrow. The Insignia is an interesting Science Fiction series and is worth a read if you a fan of the genre or want to explore the genre more after reading books like Ender's Game and Ready Player One. It feels geared more towards a male audience but that's not really a bad thing. All in all an engaging and entertaining read.