ARC Review: At the Water's Edge by Sara Gruen

*** I received an advance copy of this book from the publisher via NetGalley in exchange from an honest review. This fact has not changed my opinion. ***

This is the kind of book that snuck up on me. I have never read Water for Elephants (I know! I can't believe it either) so I didn't know what to expect from the author. I was pretty impressed with this piece of historical fiction. It had great characters, an interesting setting, and a plot that captured my interest.

My favorite thing about At the Water's Edge was the characters. Sara Gruen created a large cast of characters in this book that were complex and captivating. First and foremost I really enjoyed Maddie, the main character. She comes from a pretty sheltered upbringing but when faced with adversity she doesn't shy away. She meets it head on. Throughout the book she has a great development and really becomes a strong woman who does what is best for herself, rather than being what society tells her to be.

But there were also a ton of complex and interesting secondary characters, both good and bad. On the good end you had the characters we meet in Scotland. The locals are an eclectic and quirky bunch, especially those who work and stay at the inn. Anna, Meg, and the innkeeper Angus are kind and tough. Maddie learns so much from them including how to be more independent. There there are the characters that are in Maddie's life before. Her family, her husband Ellis, his family, and their friend Hank are all terrible people. They are judgmental and discrediting of her throughout almost the entire book. They are incredibly unlikable and it makes Maddie all the more sympathetic. Every character just jumped of the page. From beginning to end, every character I met really added a lot to how enjoyable the book was. 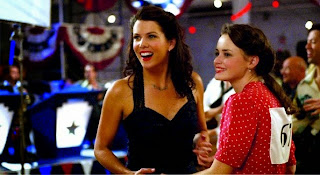 I also really enjoyed the setting of At the Water's Edge. I usually like my historical fiction to include a lot of history, to take actual events and add fictional characters. This was not that type of book, but I still really enjoyed it. At the Water's Edge is set during World War II, but it is not a book about war. It's not even really a book about life on the homefront. While the backdrop is the world is the war, it's more about the changing society and culture at the time. I especially enjoyed the exploration of gender relationships and socio-economic statuses that typically reserved for books set in the 1950's or 60's. It gave the book a lot of depth and definitely made it feel more unique than a book that focused on the more traditionally important moments that took place during the time period. That originality is one of the things I really enjoyed about the book.

In addition to the historical setting, I also really liked the physical setting of the book. At the Water's Edge takes us to a small village in Scotland, and it was a fascinating place to explore. I love books set in small towns, the tight-knit communities always lead to some great character interactions, and here that was no exception. In addition, the scenery and history of the town was interesting. And not just because it took us to Loch Ness, although that was a part of it. Sara Gruen created a setting that seemed both beautiful and gloomy. It made me want to visit Scotland to check out the castles and scenery firsthand.

And while I found the plot of the book to be interesting I did think it was a little muddled. The synopsis of the book mentions a focus on the search for the Loch Ness Monster. I have always been really interested in the history and mythology of the monster so I was really excited to read a book about that. And while the author seems to really have done her research on previous monster hunters, the search took a backseat after the first third of the book. As it developed it became more about Maddie's personal struggle for happiness and independence. I enjoyed both parts of the story and while it did transition well it seemed a little bit disconnected so that in the end when it took things full circle it almost felt like the monster stuff was an after thought. But it was still a really interesting read and captured my attention throughout the entire book. It was perfectly paced which is sometimes hard for me in books that don't have a lot of action. But there actually was a lot of action here. It was the perfect combination of thrills, suspense, exploration of deeper themes about society, and personal development. This was the kind of adult fiction that I really love.

When it comes right down to it, I thoroughly enjoyed At the Water's Edge. It was an interesting and captivating read with great characters, a historical setting that was unique and interesting, and a plot that kept me guessing and reading.

Buy/Borrow/Bypass: Buy/Borrow. I would definitely recommend this book to fans of historical fiction that are more on the character-driven side. It's a pretty quick read and the interesting setting makes it all the more enjoyable. If you are looking for a more plot-driven book about WWII them maybe give this one a pass. I'm not sure how similar this is to the author's other work but it did make me interesting in checking Water for Elephants out, and finally give it a try.

Have you read At the Water's Edge? What did you think? Leave me a comment with your thoughts. Thanks for stopping by and HAPPY READING!
Posted by My Thoughts.... Literally! at 9:57 AM