Book Review: A Feast for Crows by George R.R. Martin 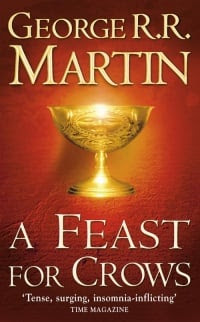 After the trills of A Storm of Swords I really was not sure what to expect for A Feast for Crows, the fourth installment in the epic A Song of Ice and Fire series. I have heard people refer to this one as a colossal disappointment and the least exiting of the series. I had also been warned, which was very helpful, that this book only contains half the characters. In A Feast for Crows we catch up with the characters that are (mostly) in and around Kings Landing.

In every book in the series we are introduced to more characters and locations in a gigantic world. What started out as a the story of a few families and the power struggles in Westeros now spans continents and has way too many characters to keep track of. No seriously, there are way too many people to keep track of, and many of them have very similar names. Often I had to look them up online to remember who they were, what they had done, and why they were important. And because there are so many people to keep track I found it kind of nice that there were fewer characters in this book. Each chapter is told from a different characters point-of-view and this way you don’t have to wait too long to learn what happens to them. And yes, I did miss a handful of my favorites like Danearys, Tyrion, and Bran but there were also a bunch of new characters and perspectives in this book to keep things interesting. In this book we got to explore more of the southern part of Westeros and visit Dorne where we were introduced to more of House Martell (who I like) and spent a lot more time on the Iron Islands with House Greyjoy (who I don’t like). And while I was glad to be able to focus on a few characters there was still some issues with balancing out these storylines. There was a very heavy focus on a couple characters (Jamie, Cersei, and Brienne) and some of the most compelling characters and storylines (Arya and Sansa) had very small parts, leaving me wanting more. 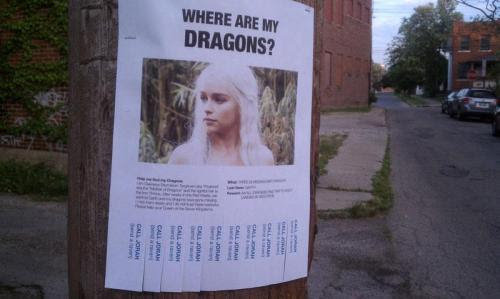 Some of my other favorite things of the series were also missing in this book. There was almost no magic this time. While A Song of Ice and Fire is not a High Fantasy series that relies a lot on magical elements (it’s more of the epic adventure sort of story) it does have magic and throughout the series the magic has been growing with every passing book. In this book however there were no dragons, no warging, no greendreams, and no red priests. And for me I was longing for the magic to return. It also didn’t really have much violence. If Storm of Swords was a bloodbath then A Feast for Crows was a paper cut. The war seems to be over and I really missed the battle scenes. Often times the book felt like it was a step backwards to the tone of book one in the series.


But what it did have in spades, which I loved, is the political intrigue. After the events of the last book, and the previously mentioned war being over, there is still an epic power struggle in Westeros and more than one region has a new leader that is desperately trying to create or cling to power. The characters are trying desperately to carve up their own personal slice of the spoils of victory or defeat so that they can better themselves. The characters in this series all walk the line between good and evil. They are selfish, conniving, and incredibly complex. They are trying to raise themselves to power by whatever means necessary including bringing about the downfall of others. One character in particular is completely losing their grip on reality as they try to cling to their power and it is making them so much more interesting even though with every passing chapter I hated them more. Many of the characters that appeared to be simple archetypes have these amazing character arcs throughout the series and they continue to develop in this book into complex and interesting characters. The characters are the best part of this series. They are full of surprises and just when you think you have them all figured out George R.R. Martin reminds you that he is the one who holds the power and completely changes your opinion of this person. And while some of them changed completely out of left field, others continued the trajectories of redemption they have been on for a few books and my love of them grew deeper. 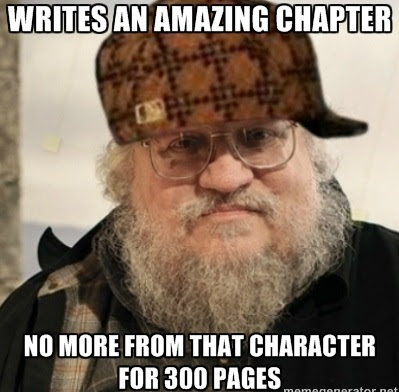 Surprisingly the plot and characters were able to redeem the book from some pacing issues. As previously stated there was a heavy focus on some characters and not on others. There was also a lot of focus on a few storylines that were not really all that interesting. In the first half of the book I found myself waiting for things to start picking up and thinking “I get it, they’re scheming against that character” and there was just way too much build up to plot points that didn’t occur until much later in the book. There were also some whole chapters and storylines that I felt like didn’t serve much of a purpose at all. But despite these issues when things did finally pick up, about two-thirds of the way through the book, it was incredibly engrossing and gripping. I read the last 150 pages way quicker that I expected and I couldn’t put it down.

As the book went on my opinion of it got better and better and when it was all over I was incredibly pleased and entertained by A Feast for Crows. The A Song of Ice and Fire series is an incredibly fantastic series and I love the way that is developing with every passing book. It’s now at a place where I can see everything moving towards this huge and epic conclusion and I cannot wait for that moment to arrive and I hope it comes sooner rather than later.

If you have read A Feast for Crows and have thoughts about it please leave me a comment. If you haven't read my post yesterday about A Storm of Swords check it out. It has a lot more details and my thoughts on the series as a whole. If you haven't read A Song of Ice and Fire and like fantasy then check it and Happy Reading!
Posted by My Thoughts.... Literally! at 3:30 PM

Labels: A Feast for Crows, A Song of Ice and Fire, George RR Martin