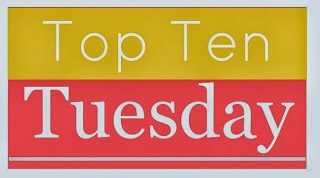 A weekly meme hosted by The Broke and Bookish

Why  was this so hard for me? I just want authors to write things and then I'll decide if I want to read it. I don't want to tell them what to write! That's too bossy! But I forced myself to sit down and think about all the things I complain about when I read or ideas I've actually had for books and when I started thinking the ideas kept flowing.


1.) Books in a Series That Don't End on a Cliffhanger.
I get it, you want to set up the next book and keep the readers interest, but if you write a good story that can stand on it's own with characters I'm invested in I will want to read the next book. (The Sisterhood of the Traveling Pants did this very well).

2.) Fantasy Books with Unique Magical Systems
It's always I can do spells or I have control over the elements. Don't get me wrong, that stuffs cool, but I want the magical system to wow me!

3.) YA Books with Believable Romances
None of this insta-love, I just met you and you're my soulmate crap! Also none of the predictable rom-com formula either. I want to read a romance where the relationship grows over time. Maybe that sounds boring but it's not something that you get often (Fangirl did this well)

4.) A Typically Secondary Character Becoming the Narrator
I usually like the comic-relief character or the sidekick type so much better than the main characters. I want those people to get more love. I recently had this idea about a book told from the perspective of a superhero sidekick. I also would love to see a retelling of a classic story told from the perspective of a secondary character. Pride and Prejudice from Mrs. Bennett's perspective.

Books to be Written

5.) More Villain/Anti-Hero Stories
I always find villains fascinating. I love getting into their psyche and understanding why they are doing what they are doing. It's particularly fun when you can understand and empathize with a character you imagined to be a villain it's makes you question the idea of right and wrong. (Wicked did this really well)

6.) More Young Adult Mysteries That Don't Have Predictable Solutions
I want some YA "true-crime" novels, YA Historical Mysteries, and YA romantic mysteries but the endings and solutions shouldn't be dumbed down. That last statement is just me being a contrary. I can't even really think of any YA mysteries, at least none where the mystery is the focus. No One Else Can Have You is the only one that comes to mind and it has really mixed reviews. Basically I want more!

7.) A Book About the Origins of a Historic Home
So I'm kind of odd and every time I'm in an interesting old house I think "what was it like when it was first build? What was this room used for? Who were the original owners?" I want a book where someone buys an old house and as they are restoring it the house comes alive in their imagination, and hey maybe there's a mystery too!

8.) Historical Fiction Set During the American Revolution
This is one of my favorite periods of history and there are so many interesting things that you can do during this period. There are a few decent MG stuff but I want some good YA and Adult fiction set in this period.

9.) Historical Fiction Set in Pioneer Times
This to me would be so interesting. It's such an interesting period in history and all the trials and tribulations would lead to some really exciting action and adventure. Again there is some good MG set in this period but I want some YA and Adult books. I actually have an idea formulating on this  and may write it for next years NaNoWriMo.

10.) George R.R. Martin to Finish the A Song of Ice and Fire Series
So I just finished the most recent book in the series A Dance with Dragons and I have to know how it all ends. GRRM tends to write a lot more than he expected when he starts writing and I'm afraid that the series is going to become too many books. Don't let this turn into the Wheel of Time series (which I have never read because there are way too many books and it intimidates the crap out of me). My friend thinks he's is just going to let the show finish the series for him. And to that I say... DON'T YOU DARE!

What's on your reading wishlist? Leave me a comment. Thanks for stopping by and HAPPY READING!
Posted by My Thoughts.... Literally! at 10:58 AM