Throwback Thursday: Before I Blogged I Read... A Storm of Swords by George R.R. Martin 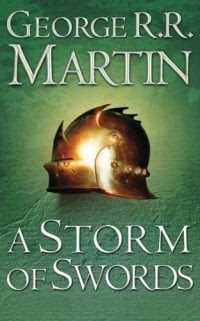 This review will be about the A Song of Ice and Fire series (which the HBO series Game of Thrones is based on) by George R.R. Martin but mostly the third book on the series, A Storm of Swords. This is going to be a long one, so... 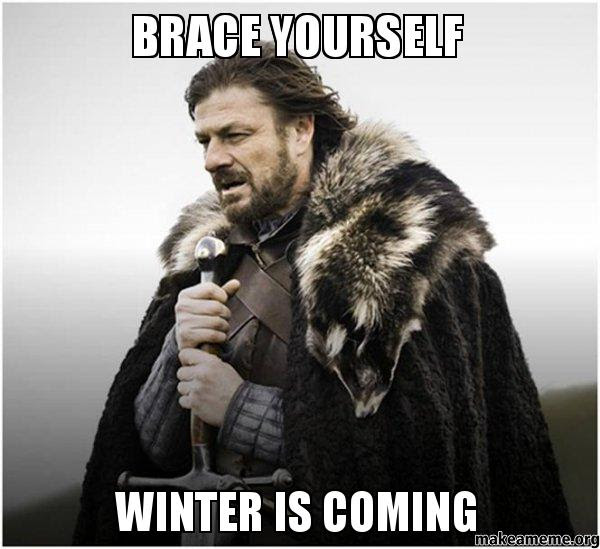 This book, this book right here, ruined me! It seriously ruined me. Every single human emotion that is possible I felt in this book. I was angry, happy, sad, scared, and confused. Sometimes all at the same time. The book was so good that when I was finished it left me so emotionally scarred that I went to a meeting an hour early because I couldn't focus on reality. But then when I read this book there was no reality, only Westeros.

And in the land called Westeros there is a power struggle for control after the previous ruling family (House Targaeryn) was overthrown and exiled in a rebellion lead by some of our heroes. There's been about fifteen years of relative peace but in Book 1 in the series, A Game of Thones, all hell breaks loose and the power struggle becomes the main plot point. It's not your typical high fantasy world where magic is incredibly important to not only the story but power, in this world you derive your power from military strength and your connections. That being said, the world-building is amazing. The land as well as each character has an incredible mythology and detailed back stories that really immerse you into this world and make it feel so real. For me when I'm reading these books the world of Westeros is all I can think about. I relate it to things I see or hear in my every day like and I make references to it constantly. I haven't felt this obsessed with a world since Harry Potter, but it's that engrossing.

As the series goes on we meet more and more inhabitants of this world. When the series begins the book focuses on a few key players in this world who are members of important families but as time goes on the world build to gigantic proportions. In this book we meet a host of new, mostly secondary, characters that are interesting and compelling. Among my favorite new characters are Oberyn Martell known as the Red Viper who is in Kings Landing to sit on the small council but also to seek revenge for the death of his sister Elia and her children when  they overthrew the Targaryens, I also really like Margaery Tyrell and her grandmother Olenna who is known as the Queen of Thorns they're both playing the game but in a more sneaky way plus Olenna is a grumpy and sarcastic old woman and she's fabulous. And as the characters part ways and go on separate adventures we also get a bunch of new point-of-view characters (each chapter is told from a different characters perspective).

But in addition to some new characters our old favorites are back as well. The best part about these characters is that they pretty much all of them change drastically throughout the series. Many of them experience these terrible life-changing events and have intense character arcs because of what they experience. Throughout the series your opinion of them changes more often than they do. To express this point I offer up three of my favorite characters as examples. First is Daenarys, the last surviving member of House Targaryean. When we first meet her she is exiled to the Free Cities in Essos and being sold to a terrifying Horse Lord for his army of soldiers. She is scared and meek and the idea of her taking back Westeros is hard to believe but as the series goes on she becomes this hardened leader who conquers cities, plus the fact that she rehatched some dragons doesn't hurt to make her more of a badass. Then there is Sansa Stark. She is the daughter of the ruler of the North and is your typical girly girl obsessed with pretty things, stories about knights, and marrying a prince. But she has a harsh reality check and learns that those are just make-believe. She sort of becomes the scapegoat for a lot of people and is very harshly treated but she has this quiet strength about it all. In this book she really takes matters into her own hands and ends up getting what she wants on her own terms (there's some debate about this but if you want I will debate you). Finally we have Jamie Lannister. When we first meet him he is a cocky knight who is best known for breaking his oath and killing the previous king (everyone calls him Kingslayer as a sneering nickname) who is in love with his twin sister (the queen) and is kind of a jerk. But in this book he has a life-altering experience and he kind of finds his honor and keeps his snark which makes me totally love him. And those are just a few of the characters and their redemptive arcs. 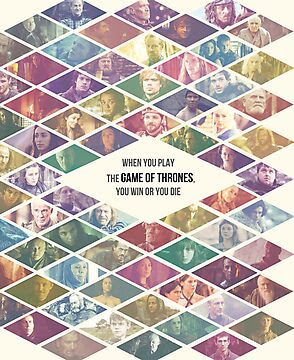 In general these characters are so different and so complex that is hard to downright hate them. Besides the fact that they often redeem themselves as the series goes on, even the most evil and villainous characters in the series you love to hate. Plus pretty much all of them are vicious, nasty, and manipulative jerks that are trying to take seize or keep their power. Most people are only out for their own interests and are playing the "game of thrones" for their personal gain even when it seems like they're doing it for someone else. And because every character seems to be playing the game you spend a lot of time trying to suss out their motivations and what their actions will lead to down the road. Remember this is a world where the main plot point is the constant struggle to take control of this country, at one point there are five people claiming to be the kings and three of them stating they are the rightful kings of Westeros. Because of this the book is full of political intrigue. There is tons of plotting, scheming, backstabbing, backdoor deals, and offers to scratch each other's back for their own personal gain. It's an over-exaggerated  example of what really does happen in politics.

However this power struggle doesn't only take place within the politics of the capital. This is a world of death and destruction. There are rebels trying to take control and battles being fought all over the country. This is definitely the most action-packed of the series. It's full of sword-fights, one-on-one battles to the death, castle sieges, and murder. So much murder! This is not a series for the faint of heart. More than one main characters does not make it out of A Storm of Swords. The expression "kill your darlings" is an understatement when it comes to George R.R. Martin. He really likes to remind his readers that absolutely no one is safe in this world and there is no such thing as a happy ending.

But fear not fans of tradition fantasy this is also a land of magic and wonder. As the series goes on more magic seeps back into the world. Part of the mythology of this world deals with magical elements like dragons, frozen zombies, people with the ability to dream that they are inside the body of animals and even invade their bodies. There is even a religious orders with the ability to bring people back to life, see into the future through flames, and kill people with shadows. These magical elements make some of the most entertaining chapters and make characters that were slightly dull to begin with or on their own way more cool because of the magic they are able to witness and perform. Some of my favorite characters have associations with the magic of this world. But the magic is as much a part of the plot as the violence. There are a host of prophecies and stories that have been foretold that directly relate to some of the characters and as a reader you cannot help but speculate about who they are referring to and where the story is going.

And boy things are really going somewhere in this book. A Storm of Swords is the most action-packed of the series. The book is over 1100 words long and by far the longest book that I have read to date but nothing in this book was dull. What tends to happen in this series is that it takes awhile for the book to get rolling but not A Storm of Swords. It was non-stop energy and excitement and I couldn't stop reading. Just when I thought things were slowing down for a character or I thought I had figured out where the characters was going George R.R. Martin reminded me that he is completely in control of this story and would throw a plot twist or surprise out of absolutely nowhere. I spent the last third of the book in complete shock about what was happening. If you've seen season 3 of Game of Thrones, you only know the half of it, and I don't mean that just because they only used half of the book.

But as fabulous as this book was, it was not entirely perfect. Many people criticize GRRM for the fact that he takes way too much time explaining things like banquets, clothing, locations, and people making it repetitive and feel longer than it is, but in my opinion this leads to the sweeping epic feel of the story. My criticism is that are some issues with the pacing because all the stories move at different speeds. It is not a perfect timeline of events and there is not an even amount of chapters from each point of view or location. So some characters will be the narrator for a lot of chapters and be involved in the chapters of others while some characters only appear in the few chapters that they narrate. In  A Storm of Swords there are so many people and so much going on that things get very muddled. You'll get a chapter for someone you haven't heard from in awhile like Arya or Theon and find yourself thinking, "where are they and what are they doing?" It gets hard to keep track of the insane amount of characters that populate this world.

But I can forgive these pacing problems because the story is so entertaining and thrilling. This is by far my favorite book in what is quickly becoming one of my favorite series. It is a detailed and interesting world full of magic, complex and complicated characters and compelling themes, plot points, and mysteries.

Labels: A Song of Ice and Fire, A Storm of Swords, George RR Martin, Throwback Thursday