That's right friends, I have gone through another phase with comics. I tend to go through entire periods where I read no comics and then suddenly I will read four in the span of a month. I don't know why, maybe I have to be in the mood or maybe I just read other things. Well anyway, my reading lately has been very slow but I have been reading a ton of comics. Well, not a ton but a fair amount. So I thought I would share some of my thoughts on them for you all. 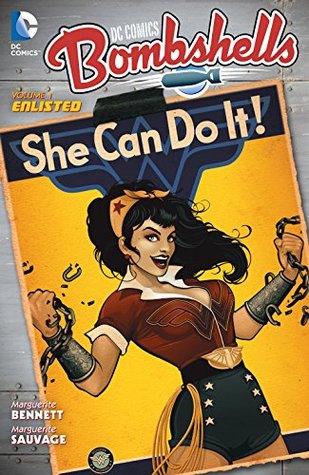 Bombshells, Vol. 1: Enlisted by Marguerite Bennett and Marguerite Sauvage
(Amazon / Goodreads)
Synopsis: The incredibly popular DC Collectibles line is brought to life in these stories that reimagine the course of history!

As Word War II rages across Europe, the Allied forces issue a call to arms for the greatest heroines the world has ever known: THE BOMBSHELLS!

KATE KANE, the all-American Batwoman; DIANA OF THEMYSCIRA, warrior Princess of the Amazons; KARA STARIKOV and KORTNI DUGINOVNA, defenders of Mother Russia; and MERA, royal daughter of the legendary Atlantis! With aid from their allies at home and abroad, these mighty women will turn the tide of war and defend those inviolable rights of Truth, Justice and Freedom.

I was super excited about this comic. I am all about female driven comics and a huge fan of DC's roster of females so I naturally had to read this. And it was really good, I wasn't blown away but I really enjoyed it.

The art, in general, was really good with pinup style costumes for all the women and lots of bright colors. It's set during World War II which felt like a natural fit and a bit of a throwback to be honest, which I appreciated. But all of that worked together well with the style of the comics.

The story too was really interesting although frankly I think it was a little too big. It honestly felt like they were trying to cram every possible female on the DC roster into this comic and there were probably too many. I liked some stories more than others but in general the constant switching of perspectives kind of led to a lack of a cohesive story throughout the entire volume. Fewer characters and a tightening up of the plot would have taken this to the next level.

But on the whole I really enjoyed Bombshells and I'm excited to now pick up Vol. 2. If you like female driven comics and are a fan of any of DC's superheroines, check this out. 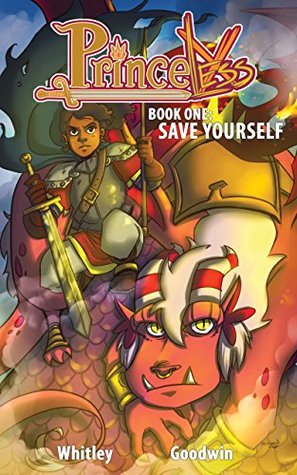 Synopsis: Adrienne Ashe never wanted to be a princess. She hates fancy dinners, is uncomfortable in lavish dresses, and has never wanted to wait on someone else to save her.

However, on the night of her 16th birthday her parents, the King and Queen, locked her away in a tower guarded by a dragon to await the rescue of some handsome prince. Now Adrienne has decided to take matters into her own hands!

Come join the Eisner-nominated team of Jeremy Whitley and M. Goodwin for a tale of swashbuckling in the face of sexism. Princeless is the action adventure for the girl who's tired of waiting to be rescued and ready to save herself

My Thoughts:
I think I saw this while browsing through Comixology, maybe there was a sale, maybe I was just checking stuff out that were unlimited, maybe I had heard someone talking about it in some way so I went to look for it. I don't know. I found it and I read it and I loved it.

This was a really fantastic comic. I would say it's more on the younger end with a teenage protagonist, bright colors, and more of a classic design style. But it's a great feminist comic with a princess saving herself (who would have thought!) and there is a lot of humor and inside jokes that I think people of all ages will enjoy.

If you like female-centric comics or are looking for something to get a young girl who likes strong female characters and comics, check this out. I'm interested to see where the story goes, I think I heard that there is a pirate princess in the next volume and YES, PLEASE! 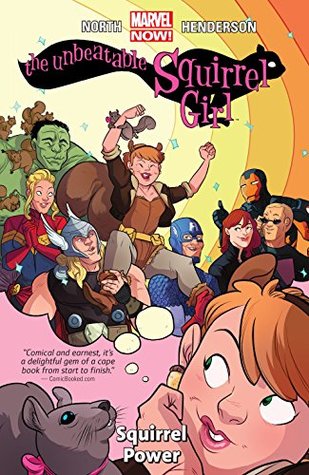 Doctor Doom, Deadpool, even Thanos: There’s one hero who’s beaten them all — and now she’s starring in her own series! That’s right, it’s SQUIRREL GIRL! The nuttiest and most upbeat super hero in the world is starting college! And as if meeting her new roommate and getting to class on time isn’t hard enough, now she has to deal with Kraven the Hunter, too? At least her squirrel friend Tippy-Toe is on hand to help out. But what can one girl, and one squirrel, do when a hungry Galactus heads toward Earth? You’d be surprised! With time running out and Iron Man lending a helping hand (sort of), who will win in the battle between the Power Cosmic and the Power Chestnut? Plus: Squirrel Girl’s classic debut!

My Thoughts:
I have been wanting to read this series for awhile now. I had heard really good things and not only do I love female driven comics, obviously, and this one seemed so unique and interesting. So during Comixology's Black Friday deals I picked up a copy and I'm so glad that I took the time to read it because it was really good.

The thing I loved most about Squirrel Girl is that she doesn't take herself too seriously. I love me some comics but I typically prefer them on the more lighthearted and funny side of things. Like I will take Deadpool and his wisecracking over Batman and his dark detective work any day. And Squirrel Girl is the epitome of lighthearted and fun. I mean come on, she's a teenage girl who is part squirrel. But that's why she is so charming. If this comic doesn't make you smile, look at your sense of humor.

But the other thing that I loved about this comic is that Squirrel Girl, while being a typically and excitable teenage girl, kicks a ton of ass. It's the kind of comic that shows that anyone can save the day, even if their main power is being able to talk to squirrels. But everyone is always underestimating her and her companions which is all the more satisfying when she saves the planet, and she does just that.


And those are all the comics I have read in the past few months. Have you read any of these comics? What did you think? Do you have any comics or graphic novels that you would recommend to me? Leave me a comment with your thoughts. Thanks for stopping by and HAPPY READING!
Posted by My Thoughts.... Literally! at 9:30 AM