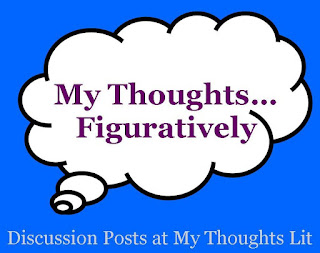 Hey everyone, I'm taking part in the 2017 Discussion Challenge hosted by Feed Your Fiction Addiction and It Starts at Midnight. The goal of this challenge is to do at least 12 discussion posts ina year. I'm not great with discussions and I am currently in the think of a severe reading slump so I thought, why not. Let's do a discussion.

You all probably know that I read a lot of YA fantasy. It's my favorite. Fantasy is my favorite genre and these days I am just more excited about YA novels that Adult or Middle Grade. This usually means that a solid 1/3 (maybe more) of the books I read in the year fall squarely in this category. And as original as they may seem, after a few they start to get real tropey. You start to see the same things over and over again. And sometimes it makes for a frustrating and predictable narrative. But to be entirely honest, there are also some really tropey books that I love. Why, because I like certain tropes. So here I want to explain a few of my favorites.

Side Note: If you want to fall down a rabbit hole of tropes check out this website called TV Tropes where I got a lot of information from. It's basically Wikipedia for tropes. All of the definitions here are taken directly or paraphrased from these entries.

Definition: They didn't want these powers, this magic, this curse, or whatever it is that was foisted upon them. The responsibility to save the world? Forget it! All those exciting adventures and the ability to potentially do anything? Take it away. They want nothing to do with it.

Why I Like Them: This is my favorite kind of protagonist. You will notice throughout this list that I don't typically go for the more traditional kind of heroes. The kind of people who think it's totally normal and acceptable to just drop everything to fight, the kind of people totally prepared mentally and physically for the task before them. I like heroes that are like "I kave no idea what I'm doing, this task is way out of my league, but I'll see what I can do." Not only is that easier to relate to but it's also so much more entertaining. It makes for more drama and conflict as the hero figures out what they need to do and better development as the go on a classic "Hero's Journey" which I love.

Examples: Harry Potter in the Harry Potter series by J.K. Rowling, Katniss Everdeen in The Hunger Games by Susan Collins, Frodo in the Lord of the Rings, All These People in this Top Ten Tuesday Post.

Definition: With all the luxury afforded to a princess and all the knights dedicated to her protection, who would have thought the most dangerous person in the castle is the princess herself? Instead of knitting or gossiping, this princess has developed powers or abilities that make her more like a cactus than a delicate flower. Instead of the Damsel in Distress, this princess's role in the plot is active. She still might fall in love with the hero, as a princess traditionally would, but she'll be fighting next to him instead of crying for help

Why I Like It: This I think should be pretty obvious. I know that the strong female protagonist cliche is pretty tired, especially in YA Fantasy but honestly I am seriously a sucker for it. For so long we had to endure damsels in distress or ineffectual and virtually unimportant female leads, but no longer. Now we have tough women who are the heroes of their own story. But as much as I am all for the SFP I am not a huge fan of the female warrior trope. I'm cool with the Lady of War but I personally prefer my kickass ladies to not feel like they have to act or dress like men to kick ass. That's why I love the badass princess. She will fight by the side of the male hero but she will do it in her skirts and crown to save her kingdom.

Examples: Aelin Galathynius in the Throne of Glass series by Sarah J. Maas, Danarys Targeryan in A Song of Ice and Fire, Lada Dragwyla in And I Darken by Kiersten White, A certain character in The Lunar Chronicles by Marissa Meyer, and a ton of others that seem to be spoilers. Apparently badass princesses do have to be in disguise.

Definition: A person who breaks the law for their own profit but is nice enough and charming enough that the audience roots for them, especially if they don't kill or otherwise harm anyone.

Why I Like Them: I mean this is honestly one of my favorite tropes and often my favorite character, especially my favorite secondary character, will be a lovable rogue. For one thing I love an amoral character, especially if they fall on the hero side of the equation (more on that later). But what I really appreciate about Lovable Rogues is when they aren't the hero at all. They make such great "sidekicks" because they are the perfect foil for the more high strung hero types who seem to fixated on doing what is right. Plus bonus points if the lovable rogue is also the romantic lead because BANTER!

Examples: Sturmhond in the Grisha Trilogy, Thorne in the Lunar Chronicles, Rob in the Scarlet Trilogy, Kelsier's Crew in Mistborn, Basically Everyone in The Lies of Locke Lamora.

Definition: The Chessmasters tug at their strings of influence, patiently move their pieces into places that often seem harmless or pointless until the trap is closed, and get innocent unwitting pawns to do all the heavy lifting. The best will also have layers upon layers of misdirection and backup plans in case an unexpected hero gums up the works.

Why I Like Them: Well for one thing, Chessmasters are my favorite kind of villians. There is nothing more satisfying than learning that everything you thought was harmless is actually been orchestrated by some malevolent force who has been pulling the strings without you even realizing. Plus I love when my fantasy has a lot of scheming and plotting and usually that means there is some kind of Chessmaster somewhere within the book. It makes for such compelling characterization and plot development.

Examples: I don't want to tell you because that ruins all the fun reveals. But you know some, right? Of course you do.

Definition: Chessmasters tug at their strings of influence, patiently move their pieces into places that often seem harmless or pointless until the trap is closed, and get innocent Unwitting Pawns (who else?) to do all the heavy lifting. The best will also have layers upon layers of misdirection and backup plans in case some unexpected hero appears to gum up the works.

Why I Like It: I mean how can you not like a character who doesn't give up? I am the eternal pessimist, I am a worst case scenario kind of person, therefore I greatly admire characters who really should throw in the towel and don't. Seriously, these characters could very easily just say that's it, I give up, and I wouldn't blame them. But they don't and to me that makes the most amazing protagonist. It's really easy to root for a heroine who keeps getting back up. And in the end often the challenges that they are thrown make them, stronger, smarter, and a better hero.

Examples: Sansa Stark in A Song of Ice and Fire (fight me!),

Definition: An antihero is a protagonist who has the opposite of most of the traditional attributes of a hero. They may be bewildered, ineffectual, deluded, or merely apathetic. More often an antihero is just an amoral misfit. While heroes are typically conventional, anti-heroes, depending on the circumstances, may be preconventional (in a "good" society), postconventional (if the government is "evil") or even unconventional.

Why I Like It: Remember when I said I like amoral characters? Yup, this is what I meant. I honestly love a good anti-hero. I love when you root for the character that you would not typically root for. I love when the actual hero of the story, the protagonist, the one who saves the day, is the one who is generally a terrible person.  Just like all the characters here it makes for really interesting characterizations and even though I know this is a trope it feel so much more creative and interesting than the steretypical hero who does everything perfect while saving the day. Those are not the tropes I enjoy. This however, I love.

Examples: Adelina Amouteru in The Young Elites, Quentin Coldwater in The Magicians trilogy. Joe Goldberg in You.

There you have it, all my favorite fantasy tropes. Obviously this is mostly for characters. I didn't set out to do that but it's just what this became. What are your favorite tropes. Leave me a comment with your thoughts. Thanks for stopping by and HAPPY READING!
Posted by My Thoughts.... Literally! at 10:30 AM