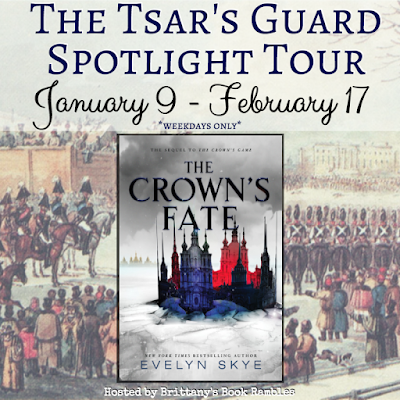 Hi Everyone,
I am so excited to be a part of the Tsar's Guard Spotlight Tour. The tour is a fan generated event to flail about our excitement for the upcoming release, The Crown's Fate by Evelyn Skye. I am super excited for this book because as some of you may know was one of my favorite debuts and audiobooks of last year. So I jumped on the opportunity to be part of this tour. Thanks Brittany for picking me!

Last year I loved being part of the Tsar's Guard Parade and shared a bookish recipe with you all that was inspired by the book. Last year it was Ludmila's Pumpkin Caramel Bars which were amazing and delicious. So I had to share another recipe with you all for this one.

I haven't read the book yet so I don't know what might be appropriate but I did hear from Brittany that multiple times throughout the book one character says the other smells of cinnamon and obviously that means that I had to make cinnamon rolls.Not only because of the whole smell this but because the main characters in this series are just so adorable and they are precious cinnamon rolls. You know what I mean, like the fandom Urban Dictionary definition of a cinnamon roll. "A character that is very kind and sweet but faces more hardship and suffering than they truly deserve. Comes from the usage of an article headline from 'The Onion' titled 'Beautiful Cinnamon Roll Too Good For This World, Too Pure.' to describe a person or character that is very good but faces a lot of pain in their life. " It just made total sense to make Vika and Nikolai's cinnamon rolls for both of these reasons.

But before we get into the recipe... Let's talk about the book.

The gorgeous and darkly compelling sequel to The Crown’s Game—perfect for fans of Red Queen and Shadow and Bone.

Magic is growing, shadows are rising, and the throne is at stake…

Russia is on the brink of great change. Pasha’s coronation approaches, and Vika is now the Imperial Enchanter, but the role she once coveted may be more difficult—and dangerous—than she ever expected.

Pasha is grappling with his own problems—his legitimacy is in doubt, the girl he loves loathes him, and he believes his best friend is dead. When a challenger to the throne emerges—and with the magic in Russia growing rapidly—Pasha must do whatever it takes to keep his position and protect his kingdom.

For Nikolai, the ending of the Crown’s Game stung deeply. Although he just managed to escape death, Nikolai remains alone, a shadow hidden in a not-quite-real world of his own creation. But when he’s given a second chance at life—tied to a dark price—Nikolai must decide just how far he’s willing to go to return to the world.

With revolution on the rise, dangerous new magic rearing up, and a tsardom up for the taking, Vika, Nikolai, and Pasha must fight—or face the destruction of not only their world but also themselves.

Evelyn Skye is the New York Times bestselling author of THE CROWN’S GAME (out now!) and THE CROWN’S FATE (May 16, 2017). She was once offered a job by the C.I.A., she not-so-secretly wishes she was on “So You Think You Can Dance,” and if you challenge her to a pizza-eating contest, she guarantees she will win. When Evelyn isn’t writing, she can be found chasing her daughter on the playground or sitting on the couch, immersed in a good book and eating way too many cookies. Author Links: Twitter | Goodreads | Tumblr | Instagram | Facebook 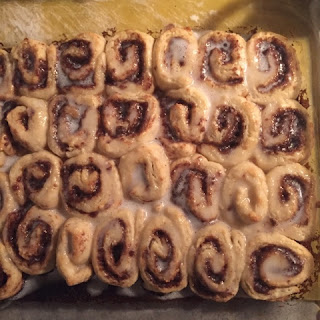 For the filling, in a small bowl combine softened butter, brown sugar and cinnamon to form a crumbly mixture.

Sprinkle 1/2 of the mixture over the bottom of a 9x9 pan.

In a large bowl mix together flour, sugar, baking powder, and salt.

Cut in softened butter (the directions say sometimes your hands are the best tools. I use a pastry blender but in a pinch, a whisk works).

Stir in milk to form a soft dough.

Roll out dough on a lightly floured into a rectangle about 1/4 inch thick.

Spread the remaining filling on the rolled out dough.

Roll up the rectangle, with a sharp knife slice into 18 small rolls (12 if you want them a little bigger).

For glaze, combine powdered sugar and milk in a small bowl and stir until smooth. (pro-tip: add the milk slowly. You honestly may not need to add as much as it calls for)

Once rolls are finished, drizzle on glaze and serve warm.

A few things I learned: I have a very small kitchen and because of that I couldn't make one big roll so I made three small ones. This ended up making more individual cinnamon rolls which is never a problem. Add the milk slowly. The glaze got really liquidy and I had to add more sugar. I would suggest adding it a tablespoon at a time and when it gets to a desired consistency stop adding milk even if it's less than the recipe calls for. The pan will get disgusting and carmelized but that's good. It gives the bottom that crispiness.

But most importantly, these smell and taste absolutely amazing. I may have to make them again when the book comes out so I can eat them while I read or listen. Obviously I can't wait for May and the book to come out. I hope you enjoyed the recipe and any fellow bakers out there, be sure to make them for yourself. This was a really quick and easy recipe.

Before you go be sure to enter the giveaway that's part of the tour and check out all the posts. The ones I have been able to see so far have been amazing. There is a full list over on Brittany's Book Rambles/

Alright, that's all I have for now. Are you excited about The Crown's Fate? In honor of what character would you bake "Precious Cinnamon Rolls?" Leave me a comment with your thoughts. Thanks for stopping by and HAPPY READING!
Posted by My Thoughts.... Literally! at 8:00 AM