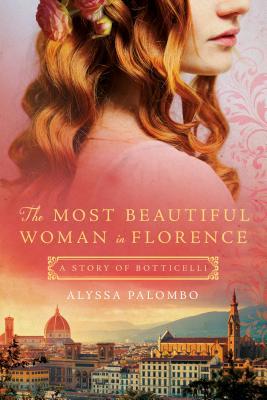 When I received an email from the folks of St. Martin's Press to ask if I wanted to read a copy of The Most Beautiful Woman in Florence by Alyssa Palumbo I was so excited. For one thing, I am a big fan of historical fiction and some of my favorites have been published by St. Martin's and even more of them have dealt with art or artists. But mostly it was because I absolutely love the city of Florence.

When I was in college (I don't really want to admit to you how long ago that was but it was a substantial period of time, like it's in double digits). I spent a semester abroad in Florence. There really wasn't a good reason as to why other than I wanted to go there. I did study history and political science but I did focus more on the recent era which isn't exactly when Italy and Florence was the most important place in the world. But it is still a city full of history.

And it's gorgeous. I've been really wishing I could go back lately. A few friends (I'm looking at you Pili) have gone lately and it makes me jealous af of them. But while I can't make that happen I can live vicariously and remember some of my favorite places and all the beautiful places to go and things to see in the city. So I wanted to share with you all some pictures with you as I prepare to start the book. 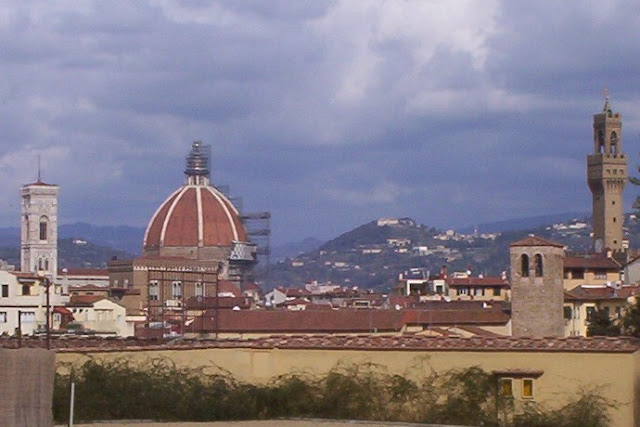 I mean seriously, look at how gorgeous that view is. But this picture was also taken from my all-time favorite within the city... 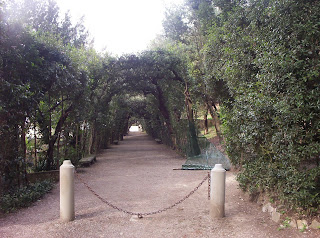 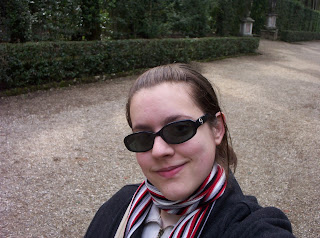 Giardiano di Boboli are the grounds of the Pitti Palace, which were the main seat of the Medici when they controlled Tuscany. They're a sculpture garden full of roman antiquities and of course renaissance sculptures by the like of Stoldo Lorenzi and Guilio and Alfonso Parigi. There are lots of walking trails and little nooks to stop and read or do your homework.

My favorite thing about the Boboli Gardens is how quiet it is. It's on the southern side of the Arno which is mostly removed from the touristy part of the city and when you are up there you almost forget that you are in one of the largest cities in the country/world. It's like being in the wilderness. 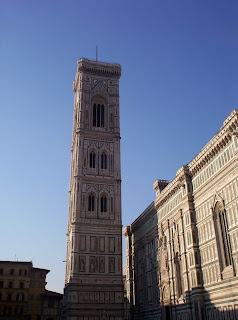 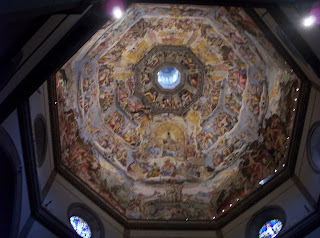 No, that doesn't stand for dome but it does have one. Duomo basically means catherdral. Every city in Italy has one. The one in Florence is pretty well known though. I used to know all kinds of facts about Cattedrale di Santa Maria del Fiore (Catherdral of St Mary of the Flower) because when I was living there I became a Duomo Tour Guide for a work study job. I didn't give many tours but like it was still a pretty dope job. (Yes, I said dope).

But it started as a Gothic design by Arnolfo di Cambio and the dome was designed by Brunelleschi. It has the fifth largest free standing dome in the world but at the time it was the largest. On the interior of the church the dome is painted with a huge fresco of The Last Judgement (a very common ceiling painting at the time). Outside there is the campanille (bell tower) which was designed by Giotto and I would suggest climbing if you want a good view of the city center because it's cheaper and less popular than the dome. It also has the Baptistery which has Lorenzo Ghiberti's Gates of Paradise which have these gorgeous bronze reliefs on them.

Seriously, if you are in Florence you cannot avoid the Duomo and you shouldn't. It's huge and beautiful and worth a visit. 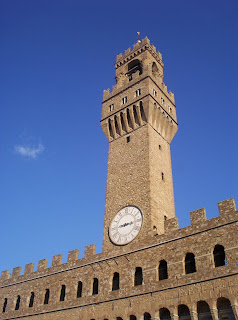 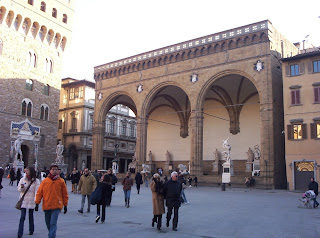 This was my favorite place to people watch in Florence. It's sort of tucked away but it is also the location of Palazzo Vecchio which is the old town hall of Florence. The piazza also is where the Loggia dei Lanzi is located which has bunch of really gorgeous sculptures. It's also the entrance to the Uffizi, the main art museum in Florence. What I'm saying is that it's really well trafficked.

But it's also very popular because Palazzo Vecchio is also the location of the original Michelangelo's David. It used to stand outside at the entrance (you can see it on the left-hand side of the image on the right). Now they have a replica because I think it caused too many crowds blocking the Uffizzi. There is also a sculpture there called lovingly "Big White Guy," which totally sounds bad and is not at all specific because like every sculpture is white because it's made out of Carrara marble/

And just before you get to Piazza della Signoria is one of my favorite gelaterias in Florence. It's called Perche, No which means why not in Italian. So yeah, why not get gelato and then go hang out in the piazza watching tourist go by taking pictures of the David. 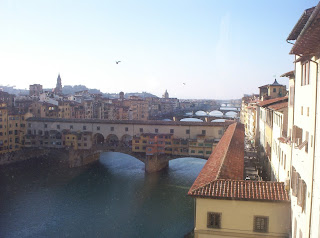 No I'm really only including Ponte Vecchio because it's super well-known. I mean don't get me wrong, it's super well-known and really pretty. It is the last surviving Medieval bridge in Florence. They used to all look like this but over time floods and earthquakes took care of the other bridges but not this one.

The bridge is full of different shops and stalls which you can see on the sides there. It used to be where the butchers would set up shop but now it's just really expensive jewelers and other artisans along with tourist traps.

I used to cross the Arno at Ponte Vecchio all the time because my friends lived across the river and also there is a really good gelateria just on the other side of the river called La Strega Nocciola.

There you have it, some popular and gorgeous places in Italy. Today I am starting reading The Most Beautiful Woman in Florence and I will make sure to keep an eye out for all these locations. I'm sure a few of them will be mentioned. And if you happen to read the book and you see them you will know what to look for.

Thanks for stopping by and don't forget to come back on Monday for my review of The Most Beautiful Woman in Florence by Alyssa Palumbo. HAPPY READING!