Hey all. It's time for this month's Crossing Over! I think this is the first time I have done two months in a row for awhile. Let's try to keep this up, huh. If you're not familiar with Crossing Over it's a feature that stemmed from my desire to recommend an adult book with crossover appeal based on a YA or sometimes Middle Grade book that are similar. I hate that we pigeonhole books into a specific age range and so I try to combat that. Plus it's basically an if you liked, then try but for crossover books. It runs once a month (usually) here and I pick the books based on the theme of what I'm reading.

So this month my theme is superheroes. I would normally just recommend two books that have superheroes, or superpowers, or whatever but been there, done that. So instead I decided to do things a little differently and take this opportunity to recommend yo you some of my favorite comics based on books that I think are similar.

If You Like:
Code Name Verity by Elizabeth Wein Read My Review / Add to Goodreads

Then Try:
Bombshells by Marguerite Bennett and Marguerite Sauvage Read My Review / Add to Goodreads

There is one obvious comparison here and it's that both books are set during World War II. But I think with these two, it goes deeper than that. For one thing they are both about women who are serving during the war. For another thing they both involve fighter pilots and spies in some way. But the other thing too is that there are a lot of themes of female empowerment and some great friendships in both books.

If You Like:
Truthwitch by Susan Dennard Read My Review / Add to Goodreads

Honestly, Rat Queens was surprisingly one of the hardest one to come up with for me. It's one of my favorite comics but I just couldn't find the right book. And then it hit me, Truthwitch. Both books have this great sword and sorcery vibe and involve a bunch of different kinds of magic, even pulling a little religion into it. But books also have kickass female characters who are pretty complex. But both books are also grounded in the friendships of the female main characters.

If You Like:
When Dimple Met Rishi by Sandhya Menon Read My Review / Add to Goodreads

What I love about both of these books is that there is a very strong family element to it. They are both really about women of immigrant parents who want their daughters to follow the cultural expectations of their heritage. And both books have main characters who want to be themselves even if that doesn't totally align with what their parents want for them. And in the end it all comes together. Plus both characters are super smart, and tough, and snarky. And there are some fun and lighthearted moments blended with the more serious.

If You Like:
Etiquette and Espionage by Gail Carriger Read My Review / Add to Goodreads

So the obvious comparisson is that both of these books take place in boarding schools. Their schools have a lot of history and secrets to unfold throughout the course of the series. Both of these books also have a fantastic gothic kind of feeling to them. They combine all these fantastic elements like supernatural and mystery together really well. They both also have great casts of characters. I only wish maps could have gone to Mme Geraldine's. Or maybe to...

If You Like:
The Gallagher Girls series by Ally Carter Read My Review / Add to Goodreads

Then Try:
The Unbeatable Squirrel Girl by Alexandra Bracken Read My Review / Add to Goodreads

Squirrel Girl was another difficult one to compare. You honestly can't compare Squirrel Girl to anything. She is one of a kind and that's why this comic is amazing. But I did my best. I think the reason I ended up deciding on these two is that they are both really fun books. They both had me laughing out loud while reading. They both also have really amazing heroines who are constantly underestimated but it never stops them from kicking ass and saving the day.

If You Like:
Illuminae by Amie Kaufman and Jay Kristoff Read My Review / Add to Goodreads

Then Try:
Saga by Bran K. Vaughn and Fiona Staples Read My Review / Add to Goodreads

Both of these books have fantastic science fiction worlds, which is one of my favorite things about both of them. They both also have a lot of characters and a lot of different moving parts. But in the end they come together in a way that makes you root for the main characters. their relationships, and their survival. Because honestly, both of these books are about the characters trying to survive in the face of a ton of adversity. 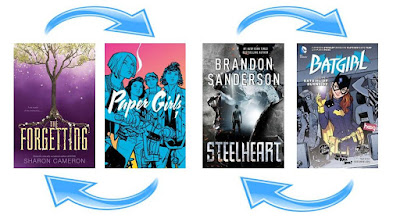 If You Like:
The Forgetting by Sharon Cameron Read My Review / Add to Goodreads

Both of these books have amazing surprises that I don't want to tell you about because then you will not be very surprised when you read them, which is the best part of these books and the first similarities. The other similarities is that the world of them. They both have subtle elements that are similar but different. Vague comparison is vague.

If You Like:
Steelheart by Brandon Sanderson Read My Review / Add to Goodreads

So Batgirl was the actual hardest to come up with a comparison for. I know, I know, I keep saying that. But with this book it is absolutely true. I love Batgirl of Burnside so much and I didn't want to not include it but this is not the best comparison. I will say though, both are obviously superhero stories but there is also an exploration of good and evil throughout the book. Plus there is some technology and subtle sci-fi elements to both books. And they are both really fun too!

Alright, there you go. Eight comics that I would recommend based on eight books. These are also some of my favorite comics so even if you haven't read the books, check out these comics.

Have you read any of these comics? Wha did you think? Do you have any recommendations? Leave me a comment with your thoughts. Thanks for stopping by and HAPPY READING!
Posted by My Thoughts.... Literally! at 9:00 AM