**** This is the final book in a series and there may be spoilers so proceed with caution. Read the rest of the Finishing School series first and come back. Here's my review of book one, Etiquette and Espionage to encourage you. ****

Last November I marathoned the Fishing School series and found myself liking it more and more with each passing book. So I was really excited to read the last book in the series, Manners & Mutiny, to see how it would all end. And fans of the series will not be disappointed. This was a really great ending to a series that is both fun and engaging with great characters, a thrilling plot. and interesting steampunk world.

In four books I have become so attached to these characters. They're quirky and interesting. As this is the final book in the series, there is lots of great character development and some arcs that have been building for the whole series come to fruition which is so great to see. There are also tons of big reveals that make so many of the secondary characters more complex than originally thought. Some of them even got these great moments to shine. And a few unexpected characters even return to the story which was great to see. But of course the main focus here is Sophronia whose resourcefulness, determination, and cool head during a crisis is on full display. But despite the fact that she is the hero here, she also has these great vulnerabilities that make her well-rounded and complex. I also adore Dimity and Pillover who have such a great sibling relationship and of course all the teachers at the school who as are so complex. 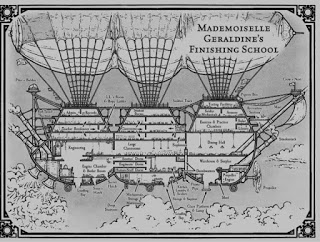 But the school itself is so complex. Mademoiselle Geraldine's Finishing School for Young Ladies of Quality is one of my all-time favorite boarding schools.  I have always been struck by the interesting combination of steampunk technology and a Victoria boarding school for girls. The school itself is as much a character as anything. It's a huge dirigible so we have all this steampunk stuff happening. In Manner's and Mutiny we get to explore so much more of the school and little nooks and crannies that we may have only gotten to see briefly if at all in the first few books. I was so excited that there was a map in the front but it was totally needed with all the exploring. It's so complex and there are so many unexpected things. As Sophronia puts it "I should have known they were deadly as well as decorative. Everything at this school is both." But that's because this is basically a school for spies. It makes for such an interesting world and Carriger perfectly builds it.

However, while the plot development was something I did love, it also was something I had an issue with. Like most final books in a series, it all really came full-circle and resolved questions and plot points that began in the first couple books. There is so much going on here both at the school and with the larger world. There's so much political context of the world and it became a part of the plot. In each book we spend a little time learning about different groups within society and here it was a lot about the Picklemen which was a component that we hadn't learned much about before. But also because we are finishing a book about finishing there was so much action and adventure going on here. The stakes are really high and every moment was so full of action. I was on the edge of my seat concerned about what was going to happen to my beloved characters. Everything lead up to a thrilling conclusion that had me both entertained and concerned. But I will say, this may have moved a little too fast. The pace was a little harrowing at times. I found a few of the earlier books to be a little slow when it came to the pacing so this being so quick to move from moment to moment was a little surprising. A happy medium between the two would have been good.

On the whole Manners and Mutiny is a great ending to a fun and entertaining series with quirky and complex characters, a unique and interesting world, and a thrilling plot. I am not ready to say goodbye to this world and these characters. I have not yet read the Parasol Protectorate so that may be my next foray into Gail Carriger's steampunk world. I hear some characters from this book even come back!

Buy/Borrow/Bypass: Buy/Borrow. This series is definitely worth a read. It gets better and better with every passing book and I ended up really loving it. If you like steampunk, YA historical fantasy, or books about interesting boarding schools then you should definitely check this series out. Fans of the first three books will love the way this finishes.

Have you read Manners and Mutiny? What did you think? Leave me a comment with your thoughts. Thanks for stopping by and HAPPY READING!
Posted by My Thoughts.... Literally! at 9:30 AM