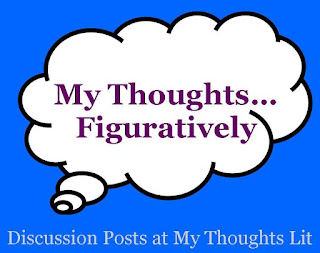 So I am once again behind in my reading for the week. I wanted to have a review ready but I don't. So I was originally not going to post anything for the second Friday in a row but then I figured I can do a discussion post. And after drafting three different ideas, it hit me. There is something I talk about all the time on the blog and on twitter but I have never really explained it in a way that maybe makes sense.

I talk all the time about how I find romance superfluous, I hate romance, and how I am romancephobic. But I have never really explained what I mean by that or what goes through my head when I read books where there is romance I don't like or if romance is a big role in the plot or character development. So awhile ago I did a post about the Five Stages of Bookish Grief when it comes to solving twists and I thought, what better way to explain my thoughts about romance then by telling you the five stages of grief.

But first there is one distinction I want to make. You can not ship the ship and not be romancephobic but still go through the stages of grief. I'm sure everyone has come across a romantic pairing that the didn't like or a romantic trope they don't like. That is often when you go through these stages of grief. But if you are generally romancephobic, you go through these stages regularly and they are even more heightened. But I'm sure we have all been through this at some point if you didn't like that particular relationship. Right? Anyway, the stages.

We all know what denial is, but when it comes to romance I think you can infer what I mean when I say that I like to start every single book in this phase. Maybe there won't be any romance. Maybe I'll like the romance. Maybe it won't overshadow the plot development. This will be great, I'm ready. As someone who doesn't usually like romance I am always kind of hoping that there won't be romance at all. And then I start reading, I'm meeting the characters things are going well and then BAM, enter romantic lead. And I'm still kind of in denial. I'm like no, but it's still okay I'll become invested in their relationship. It'll be good.

What To Do Next: Just keep reading. If you're "romancephobic" then denial is a really great place to be. Pretending that this isn't a big deal will help prevent you from moving on to different stages of grief where you don't want to live.

When you reach the anger phase it's because you can no longer talk yourself into thinking the romance won't be happening or won't be a big part of the book. At this point you are actively rooting against the characters getting together. You kind of wish there were a love triangle because then you could throw your shipping feels into a different basket. Or you are thinking that the main character is an idiot because they picked this clearly terrible person to be in love with. And didn't they just meet them? Do you even know the meaning of the word love? Take a cold shower because the world is about to end and you are more concerned about making out! Geez, I'm getting fired up just writing this.

What to Do Next: Take a cold shower yourself. So maybe your ship didn't sail or maybe the character is more concerned about romance but you getting all worked up about it is not going to solve anything. Here is where I like to think about the things I do like within the book. Really anything to not think about how much I hate the romance. And then I like to compartmentalize and move right back to denial.

In the betrayal phase you're now longer angry at the characters you're annoyed at the writer. I know it's not fair to them but that's what you're thinking. There's a lot of comparisons that happen here. You're starting to think all about tropes and how ridiculous it is that there is another love triangle or another example of instalove or another good girl loving a bad boy. How cliche! Eye roll. You're annoyed that author for not being more creative. Don't they know you hate instalove? Why didn't they give you a slowburn you could get behind? Why did they even need to have romance? You wouldn't have missed it if there was no romance.


What to Do Next: Stop whining and keep reading. Just because it didn't work out the way you were thinking doesn't mean that you should feel so betrayed. Tropes exist and are popular for a reason. It didn't work for you but it's not over sometimes these things work themselves out. Trust the writer to make a good story. Otherwise you're going to have to compartmentalize and return to denial.

It didn't work itself out, it only got worse. And now you're not angry or annoyed, you're sad.  At the depression phase you have officially realized that you don't ship it, you're not going to ship it, and the romance is going to be a thorn in your side for the rest of your reading and you're super bummed about it. A lot of times when I reach the depression phase it is because I realize that the romance I'm not enjoying is having a larger impact on my like or dislike of the book.  This is when I find myself whining and shouting "WHYYYYY!!!!" at the book or into the heavens. Or I'll want to skip whole sections because I want the action not the romance. You'll find yourself groaning when the characters are making goo-goo eyes at each other and when they're kissing or doing more than kissing are described you make a lot of frowny faces and disapproving noises.

What to Do Next: Suck it up and keep reading. I know that right now it feels like the biggest travesty that you don't like the fact that there is romance or who the character chose but again, there is nothing you can do about it. Just like when you were in anger you are going to need to focus on the things you did like about the book. Or focus on other ships. I sometimes ignore the main ship for secondary characters whose relationships I do support. Or maybe try to compartmentalize and return to denial.

Okay so maybe in the end you really did like or not hate the romance. That is really the best case scenario here. If you go through all the stages and you're like "well I kind do like them" or even if you get through it and think that you aren't actively rooteing against them I call that a win. But mostly it like... Yeah, you didn't like that romance. You didn't ship, you'll never ship it, and that's okay. You can't win them all. At this point maybe you've just succeeded in compartmentalizing and you don't even notice that the MC ended up with the character you didn't like. Or maybe you've just realized you didn't like the romance but there are other really great things about the book so there is no use getting all upset over it. Or maybe you're still in denial and will live there forever because ignorance is bliss.

What to Do Next: Compartmentalize and live in denial. Honestly that's usually how I reach acceptance if I didn't like the romance. It's going to happen, it happened, I'm not going to like it but if I pay any attention to it at all I will let it ruin a perfectly great book for me. Whatever, I'm romancephobic and I'm okay with that.

So This is Bad, Right?

I mean, I have in fact accepted that this is just how I am. But one of the things I will say about being romancephobic is that when I do find a ship that I like, boy will I fall hard for it. It's not very common for me to be so on-board with a romance that I want to talk about it, give it a ship name, or find fan art  but when that does happen I am ecstatic. Like it's almost annoying to people probably because I won't shut up about how much I ship it. For me it's about quality over quantity and I'm okay with that.

How about you? Are you romancephobic? Or are you romancephilic? How do you deal with it when you don't ship something in a book? Leave me a comment with your thoughts. Thanks for stopping by and HAPPY READING!
Posted by My Thoughts.... Literally! at 9:30 AM