His Dark Materials Reread: Joint Review of The Subtle Knife by Phillip Pullman 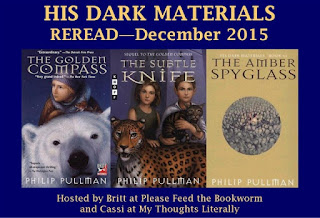 Welcome to the next post in the His Dark Materials Reread with me and Britt from Please Feed the Bookworm.  Britt and I decided we wanted to do a reread of the series because it had been awhile since we had read the books after we heard that BBC is making a TV show out them. So the reread was born! We have a bunch of great stuff planned including these joint review, mood board, and more. If you didn't get a chance to see our review of The Golden Compass, you can check it here.

Britt and I both decided to listen to the audiobook again because we liked it so much the first time. And because the joint review went so well the first time with the conversational format we decide to do that again instead of a traditional review. Hope you enjoy. And don't forget to come back every Monday for more content from the reread and check out my crossover recommendations if you enjoy this series.

But before you do that, check out our joint review of The Subtle Knife....


So how long has it been since you first read the book?

C: I read it immediately after finishing The Golden Compass, so seven years ago.

C: I loved it just as much as I loved The Golden Compass. I think it’s a really great expansion of the series and the world. Plus the way this one ended is really what hooked me on the series.

B: I wanted to pinch myself in the face. After the first book in 1997 I never continued since I chalked this series up to being childish and this book proves it is anything but.

C: Yes, anything but a kids book. I can't believe how serious things get in this book. I read it at a time where I was mostly reading Literary Fiction and it made me realize that YA and MG could be just as complex.

Do you like it more or less than the first book in the series?

C: Probably about the same amount. I love the way it ends but along the way I think there are less interesting parts. There is a lot more exposition and new characters which is really interesting but I miss the action and for some reasons the stakes don’t feel as high to me. I think maybe it takes more time to get to the “good stuff.”

B: This is a really a tough call for me. I think Cassi hit the nail on the head. There is a TON more info to get so that always takes some time. It is all done in a really great manner. I think this might be my fav by a tiny smidge more because Will is just a fantastic character. He is totally the quiet calm to Lyra’s storm. It's kind of like a bomb goes off and blows this plot wide open. What you thought was happening in The Golden Compass is just the trendiest top of the iceberg.i know Cassi loves Will as much as I do.

B: *see below* Once again my girl nailed it. The ending is just killer. There is kind of this kind of crescendo that makes you want to just keep on reading (or listening) which is exactly what I did. :-)

C: The ending. I’m still not over how it ended! The last couple chapters are super intense and so much happens in such a small amount time. It just really escalates and has this huge ending with crazy twists and emotional moments and oh man I had so many feels. Like I said this is when I really got hooked on the series. It’s so freaking epic.

C: Maybe the stuff in Citta’gazze. There are so many trips there and really only one of them is interesting. I mean I like that it’s the place where Will and Lyra meet but other than that I could do without it. And I know I should find the Spectres scary or interesting but I don’t really.

B: One name that I despise….Mrs. Coulter. She is a total “C” word….. Cotton headed ninny muggins.

In this book the characters use the subtle knife to move between worlds. If you had a subtle knife what world would you visit?

B: Well after going with Cassi to Hogwarts and drinking our fill of butterbeer I would take a tour of Narnia. Also Westeros perhaps but I would have to find a dragon first. Ohhhhh and of course I would then move myself permanently to Wonderland. Sense is such nonsense.

So which world so you think you would reside in Cassi?

B: I'd like to think I would come from Lyra’s Oxford. I think I just really want a daemon. Knowing my luck I'd end up in Citta’gazze with the soul sucking specters.

C: I want a daemon too. Being from Lyra’s Oxford would be amazing but I doubt I would be that lucky either. I’d probably be from that other world that Lord Asriel is in. He’d plotting to take over the world and doing other evil things for good reasons and I’d be like, “hey maybe, don’t do that? Your call though.”

Any new characters that you like or want to talk about?

C: Will. I love Will so much. When he was first introduced I was fangirling so much. He and Lyra are so different which is why I think they work so well together. Lyra is so emotional sometimes where Will is more calculating and cautious. But they look out for one another and help the other person get out of the hard places they’ve gotten themselves into.

B: See I told you she loves Will as much as I do! Def him. Of course I am really loving my Lee Scorsby and his daemon rabbit Hester. I don't like him as much on the audio as I did in the book though. I also and very drawn to Stanislaus Grumann. He has led such an interesting life and where he started to where he ended up was quite a journey.

C: Yes, Grumann is so interesting. I loved meeting him and learning about his past. He’s a character I forgot about entirely and it was a really great to meet him all over again.

What about the characters from the first book? They’re still awesome right?

C: Oh totally. Lyra is just as wonderful here. She’s definitely a little vulnerable at times which I like. She’s always a little bit at risk but here I think the difference is that she is in a vulnerable position because of her own mistake. I love a heroine who’s not perfect and that’s Lyra. Plus like Britt mentioned earlier, Mrs. Coulter is still evil and manipulative and I love to hate her.

C: It was so perfect again. Full cast man, that’s where it’s at. Will was perfect. Like I instantly loved the actor who plays him. He absolutely understood Will for me. I also really like the voice for Grumann and Mary Malone.

B: I agree the only person I am not too thrilled with is Lee, but I think it's in my interpretation. I wanted his Texan accent to be a bit more spot on. I am not loving Iorek. How do you feel about his actor Cassi?

C: I agree. I think maybe I’m used to Lee now but I definitely wanted him to sound more southern in the first one. Also it’s hard for me because I think that Sam Elliott who plays him in the movie for The Golden Compass is so perfect that anyone else almost doesn't work.

B: I am blown away by how complex this book truly is. We are teetering on the edge of some seriously personnel topics such as theology and spirituality and dare I say religion. There was at least 3 huge plot lines that slipped my mind.

C: Always. I notice with all the rereads I have done lately that I always forget most of what happens in the second book. I remembered so little about this book and it was almost like I was experiencing it for the first time which was really cool. Like there’s a big reveal that happens about two-thirds of the way in maybe and I forgot about it completely so when there was a clue that reminded me I was so excited.

Excited for the last book in the series?

B: I couldn't stop reading so yes! I only meant to listened a bit and needed up 5 hours in immediately after finishing TSK. This is where things get crazy

C: YES! Oh my god, yes! The way this book ended I need to keep reading. I can’t wait for the ending.

There you have it. Or review of The Subtle Knife. I hope you all enjoyed it. These joint reviews are so much fun and I hope you all are liking it as much as we are. Be sure to head over to Please Feed the Bookworm and show Britt some love too. Don't forget to come back next week for the next review and more fun stuff after that. Thanks for stopping by and HAPPY READING!
Posted by My Thoughts.... Literally! at 8:30 AM