So I have not met a ton of authors but after three BEAs and a few author events I have met my fair share of favorites and fantastic authors. It's always super strange talking to them. I want to say something and preferably something more than "I like your book." So after awhile I realized that I am super awkward. Like I always say super embarrassing things. Either I fangirl like an idiot or I just say dumb stuff. So I then decided I wanted to be awkward on purpse. So here are some  authors I've said weird stuff to. In order of least awkward to most. 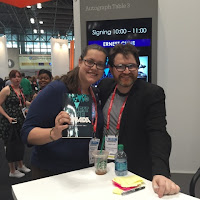 I met Ernest Cline at BEA in 2015 and I fangirled like a moron. I mean I think he was mostly flattered and appreciated it though. I told him that I loved Ready Player One so much and that I read it at a time where I was first blogging and it really resonated with me.

Anna Banks came to Pittsburgh as part of the Fierce Reads tour. When she was presenting she talked about how she writes in her bathtub so afterwards I went to get the book signed and told her I read in my bathtub fully clothed with no water involved. She goes "see, she gets it!" 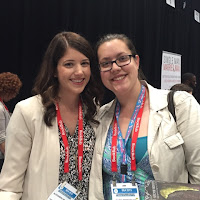 I met Alex at my first two BEAs. The first year I met her I told her how much I liked The Darkest Minds series and that I ship Chubs and Vida so hard because I feel like they have great banter and that they get each other. We talked about them for a bit. The next year I thanked her for that ship sailing. 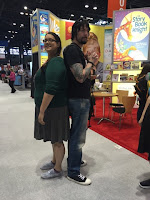 I met Jay at BEA last year and everyone was going up to him and taking pictures with him on his knees because he's so tall. I went up to him and was like "hey, I'm also tall so I want to stand back to back with you." In the picture I'm grinning like an idiot he's got a Charlie's Angel's finger gun. We didn't coordinate very well 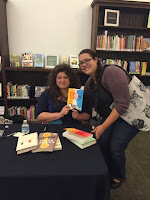 I mostly can't believe I wasn't more awkward with Rainbow Rowell when she came to Pittsburgh. I am seriously obsessed with her and tried to meet her at two BEAs. But during her talk she mentioned how she was reading The Magicians series and I love that so much I started talking about it with her and she yelled at me not to spoil anything. 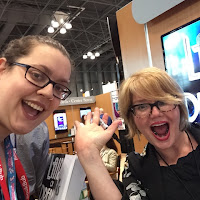 Libba I met twice and both times were super positive. The first time I met her I reminded her that we talked about how I wanted her to narrate my life and she agreed so she should start now and the second time I took a picture and she said we needed no filter because we already had the pretty filter.

I wet Eion at BEA last year. He looked at me and goes, "I like your nose ring. Did it hurt?" So I told him no not really and these days I forget it exists. He turns to his publicist and says "I think I should get that, it would look cool." She looked at me terrified as if I had opened up a can of worms she now had to close.

Ann came to Pittsburgh on tour to talk about her new book and I had just started listening to the Babysitter's Club Club podcast. Of course I had to ask her about it. She had heard about it but hadn't listened to it. I informed her that it's very funny and that they think Stoneybrook is a hive of bees.

I've met Maggie three times now. The first time I hadn't read the book and the third time was at BEA and everyone kept skipping in front of me with their cut the line pass. But the second time was the best. I told her she could write anything she wanted in my book. Like "Fuckweasel or whatever." Guess what my copy of Blue Lily, Lily Blue says.

Leigh Bardugo I've met twice. The first time I told her about how I read Ruin and Rising in my dry bathtub, fully closed because I was so nervous that was the only place I felt safe. Then the following year she complimented my name and said I sound like a badass steampunk heroine. So Leigh is in the middle because once awkward, once awesome.

2.) Lev Grossman
I met Lev at my very fist BEA and I was so surprised The Magician's Land was there and he was signing. When it was my turn to get the book signed I made a complete idiot of myself. Not only did I mention a spoiler for The Magician King but I was so over-eager he looked at me equal parts confused and worried. 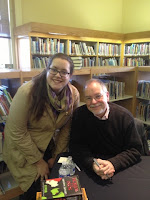 And the absolute most awkward was Gregory Maguire. I've met him three times now and it's gotten progressively more awkward. The last time was the best. I told him "Wow, this is our third time meeting in two years, we have to stop meeting like this, people are getting suspicious." He did not laugh.

There you go. All the authors that I have met and had awkward conversations with. If I am being entirely honest a lot of this was because of my fangirling. This may be a list of my favorite authors I've met. I mean there are a few I've met which I may or may not have had awkward conversations with them too. Like Marissa Meyer, Susan Dennard, and Julie Murphy. I must have been awkward I just can't remember how. Also, honorable mention to all the authors who I said "just a signature is fine," because that is always awkward.

Anyway this is a pretty good list. Which favorite authors have you met? Have you had any awkward interactions with authors? Leave me a comment with your thoughts. Thanks for stopping by and HAPPY READING!
Posted by My Thoughts.... Literally! at 9:30 AM