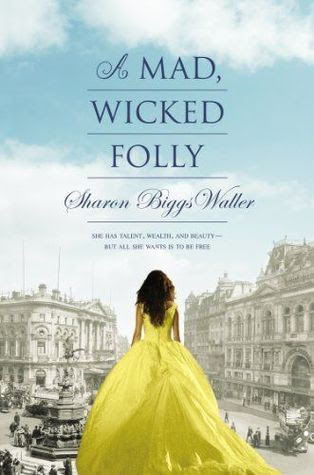 Title: A Mad, Wicked Folly
Author: Sharon Biggs Waller
Published:
Amazon Goodreads
Synopsis:  Welcome to the world of the fabulously wealthy in London, 1909, where dresses and houses are overwhelmingly opulent, social class means everything, and women are taught to be nothing more than wives and mothers. Into this world comes seventeen-year-old Victoria Darling, who wants only to be an artist—a nearly impossible dream for a girl.

After Vicky poses nude for her illicit art class, she is expelled from her French finishing school. Shamed and scandalized, her parents try to marry her off to the wealthy Edmund Carrick-Humphrey. But Vicky has other things on her mind: her clandestine application to the Royal College of Art; her participation in the suffragette movement; and her growing attraction to a working-class boy who may be her muse—or may be the love of her life. As the world of debutante balls, corsets, and high society obligations closes in around her, Vicky must figure out: just how much is she willing to sacrifice to pursue her dreams

This is the second book I have read in the past two months set in Edwardian England. Maybe I should blame Downton Abbey for that or maybe I should just credit authors for realizing that this is a pretty compelling period in history, at least for me it is. It was a time of transition. Queen Victoria, not quite the feminist icon she is made out to be, was pretty conservative but when her son Edward takes the throne things start changing. It was a particularly interesting time for young women. Not only was the country modernizing, including moving away the tradition class structure, but the fight for women's suffrage was really taking hold. However, the people in power,  were reluctant to give up their control. Needless to say there is a lot of conflict.

Sharon Biggs Waller does a great job of setting that scene for the reader. We feel the sense of conflict between the desire to change but having to fight the establishment that wants to keep things the way they are. She weaves the fictional characters and situations around real life events and historical figures within the backdrop of the women's suffrage movement in England. As the reader I felt completely immersed in this world. The plot wasn't filled with action and it wasn't really character-driven either. It was a nice mix between the two as the characters were influenced by what was happening around them.

This was a particularly interesting book to read with all the talk in the book blogging community about feminism and what makes a strong female character. Vicky, our main character, isn't someone you might think is really a feminist.  In the beginning all she just wants is to be an artist. But the blinders come off when she shames her family and is forced to return home, give up her art, and marry someone that her parents pick for her so that she can not only restore her reputation and theirs. But Vicky isn't satisfied just being a wife and mother. She is determined to get into the Royal College of Arts. So she continues to draw and find compelling subjects to draw. This is how she gets connected with the suffragettes. Throughout the book Vicky has a great character development and I really identified with her as a protagonist. She knows what she wants and she is willing to fight for it and do whatever it takes. She comes to the realization that it's more of a political struggle slowly and she realizes that she can use her gift for art to fight. As a character she  is a little stubborn and reckless but that adds to her charm. Throughout a lot of the novel I was nervous for her that all her hiding and secrets were going to come to a head and the proverbial shit was going to hit the proverbial fan.

But probably the most interesting thing for me was the romance. I read this book as part of my anti-love month, but I had heard from other reviews that it is totally shipworthy. There is a pretty interesting "meet cute" with a police officer named Will, who Vicky is initially attracted too and really wants to draw. My head however was in a totally different place in terms of romance and I couldn't really see their relationship as a good idea. I had just come off a book that turned the romantic notion of marrying for love and being poor but happy into a bad thing. When I started this book I felt like I had a very cynical view on love, and the ship that I was shipping was not the one you would expect. But as the book went on so did my opinion of the ships and romance in general. It takes a rare book to restore your faith in love but A Mad, Wicked Folly was that book for me. Just think how you will feel about the book if you are in the romantic sort of mood.

A Mad, Wicked Folly is a great piece of young adult historical fiction. It immerses you in the time period, has compelling characters you roof for, and the right amount of romance. I give it 8.5 out of 10

If you are looking to try Historical Fiction give this book a try. If you have read it, what are your thoughts? Leave me a comment and of course HAPPY READING!
Posted by My Thoughts.... Literally! at 12:19 PM