Make War Not Love - Why I Love The Grisha Trilogy

Today is the day we've been waiting for... The cover to Ruin and Rising by Leigh Bardugo is finally released! If you haven't seen it yet, here is in all it's fiery glory! 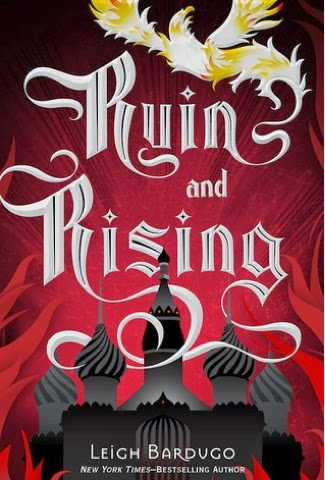 Ruin and Rising is the final book in the epic Grisha trilogy by Leigh Bardugo that began with Shadow and Bone, and continued with Siege and Storm. I read both of these books in January as part of my High Fantasy month and was instantly hooked, devouring the books in record time for me! The books combine elements of fantasy, mythology, and coming-of-age stories into one delightful ball of gritty and entertaining magic. As the series goes on the books keep getting better and better. But there is one thing I love about this series and it is summed up by my favorite quote.

That brilliant statement by Nikolai from Siege and Storm says it all and it says so much in so few words. This is a world, much like the previous covers, full of gray. It is a world that has been ravaged by war where millions of people are starving, ruled by a monarch that seems disconnected with the blight of the people. Those citizens with magical powers are taken from their homes to fight for their country under an odious leader known only as the Darkling. Oh and did I mention the fact that there is an entire section of the country that is pitch black and overrun by terrifying monster that will rip your flesh off? Yeah, that too. It's not really the ideal world to live in.

But we do have some leaders and revolutionaries to help make the world a better place. The question is... What does that better world look like and how do we get there? Isn't that the ultimate question every leader has always asked themselves? In the Grisha trilogy, Leigh Bardugo brilliantly explores this idea. Each of the characters walk the fine line between right and wrong or good and evil. They all have strengths, weakness, and like Gretchen Weiners hair they're full of secrets! Throughout much of the books I found myself wondering if characters were doing what was best, and if they were doing it for themselves or for the betterment of others? We're they doing the right thing for the wrong reasons or the wrong thing for the right reasons?

But all these questions and secrets is what makes the book so compelling and interesting. Everything being so fuzzy and mysterious means theorizing and speculating, which I love doing! Not to mention all this mystery makes me all the more excited about the ending of this spectacular series! June 17th is how far away?

I cannot wait to find out how it all ends. I have a feeling there will be lots of secrets revealed, lots of epic battle scenes, and lots of tears! BRING ON THE TISSUES!

As the release draws closer I'll be taking part in the Grisha Street Team challenges so look forward to more posts where I gust about the series! Join me in the gushing by telling me your favorite quote from the series in the comments. If you haven't read the books I definitely recommend them and for more info check out my reviews.

HAPPY READING! And Happy Valentines Day! Remember today make war not love cause that's the Grisha thing to do!