Now don't get me wrong, I think the publishing world's arbitrary categorization of books as Middle Grade, Young Adult, New Adult, and Adult are silly. As a preteen I was reading Jurassic Park and as an adult I read The Giver. You can get enjoyment from a book regardless of the age it is geared towards. But I also think that there are a lot of people who don't read books because they are geared towards a certain audience. So I decided to start a new feature on the blog where I recommend books that have similarities in their genre, tone, and themes. So... let's break some barriers! 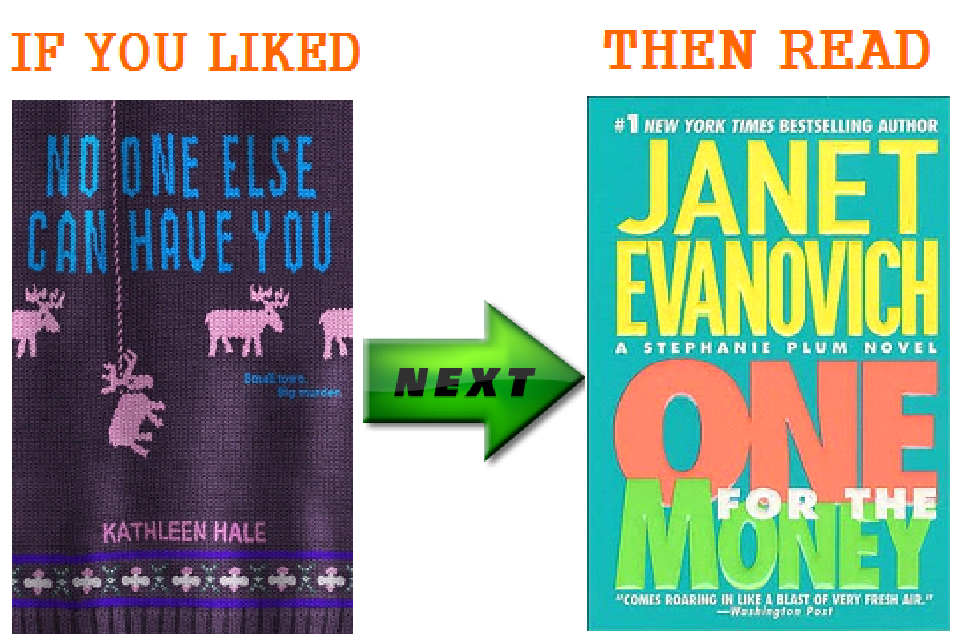 I know No One Else Can Have You is a controversial book and pretty polarizing, but I really enjoyed it (check out my review). When I was reading it I couldn't help but find similarities to one of my favorite mystery series, The Stephanie Plum series by Janet Evanovich.

Like Kippy the main character in One for the Money, Stephanie Plum, unexpectedly tumbles into the position of amateur sleuth and is not very good at it. Hilarity ensues as she learns how to search for clues, question suspects, and track down bail jumpers in her new job as a Bounty Hunter. And like the cast of characters in No One Else Can Have You, the Trenton, New Jersey of Stephanie Plum is inhabited with fun and quirky characters. My personal favorites are Lula a prostitute prone to wearing bright colored spandex clothes that don't fit her, and Grandma Mazur. Plus in One for the Money (which I referenced in my Top Ten Tuesday post yesterday) there are the totally swoonworthy characters of Ranger and Joe Morelli. The romance is fantastic with a surprisingly realistic love triangle and Stephanie's inability to decide make a lot of sense. The tone of the books are similar with both books being murder mysteries full of comedic moments. The comedy in One for the Money is not as dark and more lighthearted so if that was one of the things you didn't like about No One Else Can Have You, don't let that prevent you from reading One for the Money. But the best part of One for the Money is the mystery. It is incredibly interesting and difficult to solve with a great pay off.

If you liked No One Else Can Have, are looking for a lighthearted murder mystery, or like books with quirky and interesting characters then check out One for the Money by Janet Evanovich and then the rest of the Stephanie Plum books (there are over twenty).

I hope you enjoy this new feature and let me know if you want to see more of them. And if you have any suggestions for books to recommend let me know. HAPPY READING!

Labels: Mystery, No One Else Can Have You, One for the Money, Recommending Adult Books